We have met lots of new people here in the CB and thought we would "flashback" to some posts to reintroduce ourselves.

First, an introduction to our Bridge Angels:

Butterscotch was a long haired male orange tabby that lived to age 16.  He was social, lovey and just an all around great cat.  When people talk about the personality of the orange tabby, Butterscotch was a grand example.  My Dad was adamantly anti-cat and used my allergies as an excuse.  However, when I left for college he told my younger brother that if he could stay on the honor roll for 2 semesters he could get a kitten (I swear if Dad knew that was going to work, he would have made the bet for a longer period of time). Dad lost and Rob picked Butterscotch.  When I moved out, Butterscotch and Maestro moved in with me and were wonderful companions for a single girl in a new town. 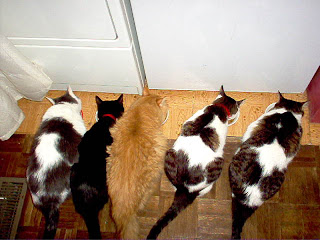 Tigger was adopted when I lived in Texas.  A guy from work had a cat that had 2 kittens.  I took one and my friend took the other.  Tigg was pretty social when I lived in Texas, but got skittish when I moved back to Ohio.  I swore that I was OK living in an apartment since no one ever saw the 3rd cat. At age 7 he was diagnosed with hepatic lipadosis and we managed to get him through it. The vet said it rarely reoccurs, but I swore to Tigg that if he got sick, I wouldn't put him through that again.  About 2 years later, he got sick again and I let him cross the Bridge. 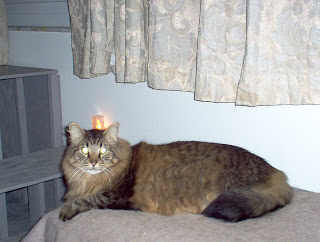 Maestro is the resident old man of the family at 16 yrs plus. 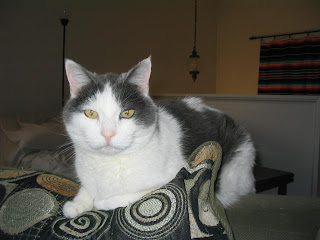 Tim & Tom are 8 year old brothers. My first venture into fostering cats - maybe the fact that they didn't leave should have been some sort of sign. :)  My favorite story about them is here. 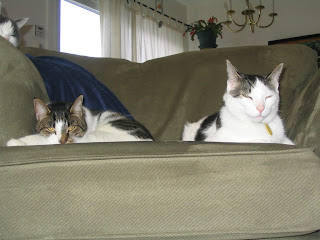 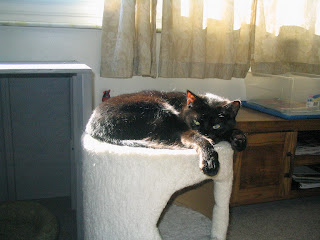 Ivy is another foster failure. 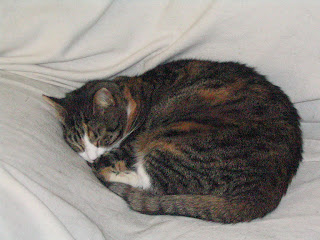 Spud was found as a kitten when I was fostering Ivy.  I think part of me was hoping for redemption since he so resembles Tigg.  However, fate has a sense of humor cause Spud has the same spooked out temperment as Tigg did.  sigh.... 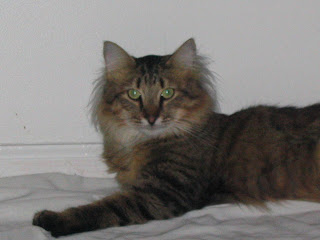 Posted by Random Felines at 9:32 AM