I was wandering around the internet (cause I am bored and have another hour at work...sigh).  Anyhow, I found this article on Dogster about orange females tabbies.  how rare are female orange tabbies?

First let me say, Utah is female and an orange tabby... 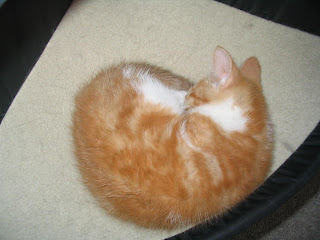 Second, she is by far NOT the first orange female tabby I have ever seen or fostered.

I did laugh at the comment about "no orange cats".  I went to a cat show (where I met Teri from Curlz & Swirlz) and the colors that were being tossed around made me smile.  I had a friend who breeds Maine Coons and British Shorthairs send me a picture of her female Brit - color blue something something or other.  I opened the picture and was "oh, a dilute tortie".  :)

And I have within the last couple of years discovered what a "torbie" color cat actually is: a cross between a tabby and a calico (or a tortie, but torbies all have white, so I am not sure how that works, but hey, I didn't make up the word).  Anyhow, they are tabby cats that have orange and brown markings with stripes (and are probably female like calicos and torties).  Ivy is a torbie: 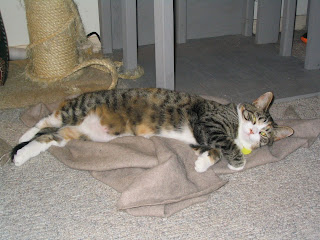 (and yeah, this is an old pic before she bulked up like a thanksgiving turkey)

Of course, you can always make up your own colors...I am all for originality!
Posted by Random Felines at 4:19 PM