Dakota and Bug spent 3 hours at the adoption event on Saturday.  Everyone thought they were cute - no one wanted to take them home.  sigh....

Chiclet got sprung from the bathroom when I got home.  However, I ran out today at lunch to buy one of those under the bed containers to use as a bigger litter box since she is going right in front of the box.  At least I have to presume it is her - didn't have any problems until she got back out.  She was having fun running around and chasing the kittens on Sunday.  Spud and Tommy are hissing/growling at her, but they will get over it in a couple of days.

On Saturday the kittens were released from the kitchen as well.  It wasn't my intention, but Carolina decided to learn a new trick - climbing the gate.  For me, that is the sign that they are ready to be out and about.  Once one learns it, they all do.  Except in this case Utah would have been stuck in there since she is WAY to short to climb over.  I smiled as I watched her run around yesterday - I think she is beginning to resemble a daschund - long and low.  She keeps us with her siblings (though a pace or two behind) and tends to get run over when they change directions before she catches up, but she is right there with them.  :)

So, the kittens were left out today.  Chiclet is locked back up in the bathroom until I get home and get everything set up.

Nevada was being adorable while he was napping, so I will leave you with cute pictures from the weekend. (no, Dakota didn't pounce on him, though it does look like it) 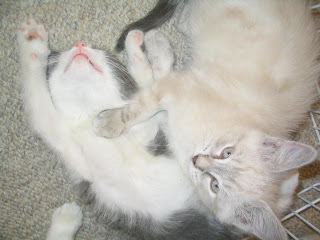 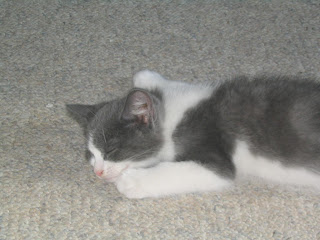 Posted by Random Felines at 1:24 PM