Chiclet and the kittens update

Momma cat isn't doing so hot. Woke up Monday morning and the bathroom was a mess...throw up and everything else. I moved the kittens to the kitchen and left her in there by herself. Got home after work and she had thrown up more and there was bloody pee in the box. Not good. She was VERY listless and didn't eat much of anything. More bloody pee later that night.


Took her and the kittens to the recue today. They kept Chiclet. I asked about the poison thing and they think it would have shown up before this (someone tried to poison her and the kittens before they were rescued using rat poison on the kittens). I am not so sure...if it had done internal damage, wouldn't that take a little bit to show up? I have a friend who is a vet tech and I am going to ask her. Anyhow, they are going to give her fluids and see what they can do for her.

As for the kittens, they are vaccinated and back home. They wondered if they weren't from separate litters based on size, except the dilute girls look so much alike. They were charmed by Utah's tiny self, though she was a pest to vaccinate. We would like to get at least the big ones spayed/neutered before the Petsmart event. I agree....

Oh, and there was a jail break in the car. I took Bug so they could see her...she managed to get out of the soft sided carrier I was using for the kittens and led 3 others on an adventure in the hatchback while I was driving. At one point Maine and Carolina were on the top of Chiclet's carrier looking out the back window - can't imagine what the guy behind me was thinking. :)  I almost drove off the road laughing.  What else could I do at that point??  I did have a couple come over the seat and around the side, but they were grabbed and put back over into the hatchback.  (I drive a VW Beetle and the back seat is down so I have more space)

Please keep your fingers crossed for Chiclet - she is a very nice girl who deserves better than what she got before she was rescued. 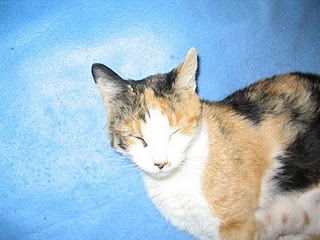