Friday night the kids came out to play with Bug in his condo.  They ran around and jumped on each other like crazy.  Then I put a box from work in there and the games really began.


After a while, every one fell asleep - the kittens in a pile and Bug off to one side.  It was kind of sad actually.  So I got to thinking about it - there is no reason now that the kittens are basically eating on their own that Bug can be in the bathroom with everyone at night.  Friday night was the first night and he seemed fine with it and so did Chiclet, so he will be in there at night from now on.  Of course, I spent several moments during the night on Saturday and Sunday chasing him down the hall when he made a break for it.

The kittens spent Saturday and Sunday afternoon in the pen in the living room with a slightly different configuration than Bug's condo to give them a little more space.  They played some and spent a lot of time sleeping in the sunshine.  By Sunday night, Maine was whiny and when I put Chiclet in there, she let them nurse, so that worked out too.  The pen got moved this morning and everyone is in the bathroom with the pen giving them more space and some fresh air. 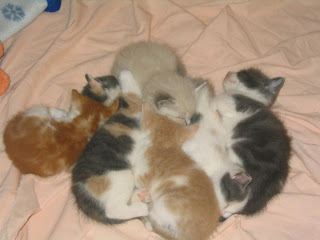 Sunday was spent working on the feral cat houses we are going to put out this winter.  Holes were cut and insulation put in one of them as an experiment.﻿  The first one got the Junior seal of approval.... 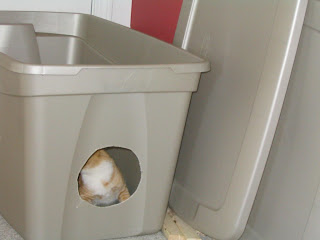