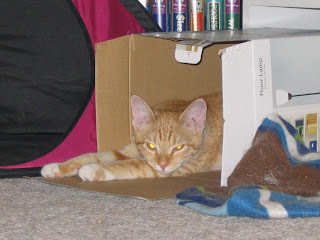 Well, the little orange mancat is adjusting well.  He is still a little hesitant during the day - I still can't get him up in my lap after the eye ointment incident.  :)  However, he loves me at night and is out around the house during the day.  Plus he isn't nearly as jumpy anymore.  I have feral cat houses in the living room and he has been "cat testing" them for me.  Plus he LOVES to stalk Mozart - who just seems to find him annoying.  He has discovered that the kittens have food during the day and has been jumping in with them for a snack.  He whines when they get close but they don't seem to think he is all that scary.  LOL

Bug had a v-e-t visit on Friday and now has the first set of vaccines.  Weight - 1.6 pounds.  Oh - and I screwed up another one....Bug is a girl.  Which actually works from a cute standpoint.  :)  There is a petsmart adoption event on Nov. 13th.  I am hoping she is big enough to spay before that so I can try to find her a home of her own for the holidays.  Right now she is spending her days penned up with the other kittens and they are having a blast running around and being nuts.
﻿

And an update on Maestro: nothing really exciting on the blood test.  Not sure if that is good or bad....  I refuse to put him through a boat load of tests just to prove something however.  So for now, the vet suggested changing his diet to a kidney prescription food.  Plus pepcid and prednisone.  I am going to give it a couple of weeks and see if it makes a difference.  I guess I am reluctant to run more test since I don't know what it would prove - I refuse to put him through much and having a "timeframe" doesn't prove anything either.  So, we will treat the symptoms and see what that gets us.  So long as he is getting around and seems comfortable, then so be it.
﻿
Posted by Random Felines at 11:53 AM