The end of the week brought a scare for the household. I came home about 10pm from a party on Thursday. Everyone was fine. I woke up Friday morning and no sign of Tommy. He wasn't demanding breakfast, and I searched the condo high and low. I got ready for work and walked into the living room to discover one of the window screens was MISSING!! He must have been sleeping in the open window (the weather had been nice) and it fell out and he went with it. I freaked out!!! But, I had to go to work since I had a case that had to be filed.

After a few hours, I managed to get to a point where I could leave. I had him posted on PetFBI.com and updated the microchip company. I left a flyer with CAHS and CHA.

A friend called on my way home and offered to come help me look. Kelly and I searched the neighborhood for a couple of hours but didn't hear or see anything.

As we sat upstairs (after trimming Ivy's toenails - boy do I owe Kelly now), there was a bang on the door. I ran down and it was a neighbor who had seen the flyer I had taped to my front door. She had seen Tommy outside my garage around 11pm, but was unable to catch him. We spoke for a few minutes, and as I was heading back inside, Kelly was up on my balcony and told me to wait cause she heard something. I stopped and yep - there is was...Tommy cries!! Kelly came downstairs and we looked high and low. He was under a neighbor's a/c unit. No entry to her patio, so Kelly bravely climbed my ladder and scared Tommy back under the stairs where I could crawl under and managed to grab him. 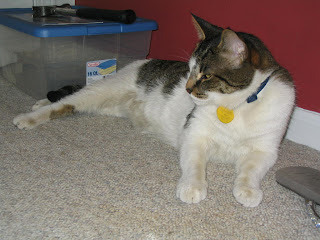 He didn't seem much the worse for the experience, other than being pretty dirty. I don't have the heart to give him a bath, and now it being Monday, he is getting himself a bit cleaner.
I now have a new found sympathy for those people who come into the shelter looking for a lost animal. All I can really say is THANK YOU to Kelly and that I kept telling myself - he has a microchip!!!
Posted by Random Felines at 6:27 PM