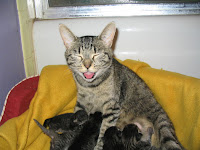 Chloe was brought to CAHS on March 26. Sometime on the 27th, she gave birth to 5 little clones. I picked her up on March 28. She is a nice, very petite and VERY chatty brown tabby girl. I am not sure about the kittens yet....at least 1 girl, but I am not too sure about the rest. She has an appointment on April 11 to get her vaccines updated, so I will get an expert opinion at that point.
So far she has been very good with them. Staff think she is about a year old, so she has had a few teenage mom moments, but is pretty attentive. However, she does think she needs to come out of the bathroom where she is living with the kids. She isn't too bad with the other cats so long as they aren't too close to the bathroom door. She caught Tim being "too close" for her standards and she charged him. She did stop right away and came back to the kids.
I just wish we could cut back on the whining. She sits by the bathroom door and cries. No idea what she wants, but she has quite the voice.
Posted by Random Felines at 3:20 PM