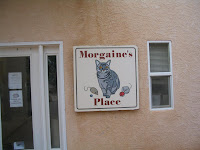 Friday morning was Morgaine's Place. Here are probably the most friendly cats (in my opinion). I was set up to clean the first room there. 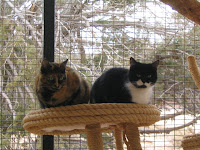 Now, what I found interesting was that the outside rafter system was closed off with panels. I asked the caregivers and they said that some are cut off in summer due to cats going up and refusing to come down no matter how hot it gets. In this case, the panels were put in place to force Cara and Baron (see left) to deal with people. They are semi-feral sibling kittens. Cara will allow herself to be petted once to twice by staff, but Baron is still unconvinced.

Samco was a new occupant in Morgaine's. Since I was going to be in there, the c 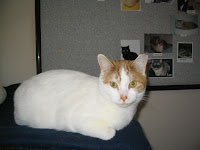 aregivers asked if I would be willing to supervise his introduction. They had him in a tower/condo in the room for a couple of days to see how things would go. Since I was going to be in there, they let him out to check everything else out. There was a little smack talk, but I never had to break anything up. He never figured out the cat doors to the outside while I was there that morning, but he shot out the people door when I went out to clean. And of course, he felt the need to help me clean by attacking my mop. 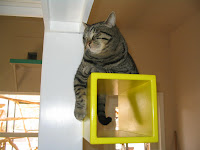 Rambo here is showing off the boxes attached to the center pole in each room. All the boxes are a different bold color. Some rooms have color coordinated bedding and others not so much. It is up to the caregivers in each house. 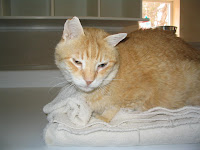 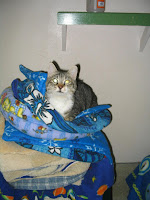 Wild Child (making sure the laundry doesn't try to escape)
Posted by Random Felines at 12:36 PM