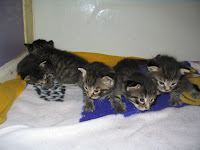 Well, they will be 4 weeks old this coming Saturday. And it is official - 1 girl and 4 boys. I still haven't decided on names. I was leaning toward Venus for the girl. Then other Roman gods for the boys. Ends up they would also be named after planets. And it wasn't working for me. So, they are yet to be named...
But they are getting fiesty. They were nursing the other day and the girl was nursing while kicking one of her brothers in the head to get him to move.
My new favorite thing is to go in and lay on the floor so I am eye level with them. They aren't wild about being picked up, but they will come up and I can pet them from there. The one smaller boy (with one white toe) will come right up to me and ask for affection.
That being said, my days are numbered - they are learning to get around. Right now I only have to deal with Chloe trying to get out the door as I come in and out....give it another few days and I will be tripping over kittens as well.
Posted by Random Felines at 4:14 PM