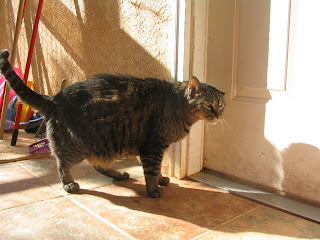 Special needs cat? No problem here. See, Cornflake lives at Colonel's. But he has some....agression issues. :) So, he lives in a crate in his room at night. Every morning, they give him a pill and let him out to wander the halls outside the room (Colonel's is the only house I was in that doesn't have lobby cat - though they do have one that lives in the kitchen) for a couple of hours to let the pill kick in. Then he goes back to his room to hang with the other cats. And no, he isn't missing his one ear - but it doens't stand up right either.
Posted by Random Felines at 12:18 PM