If you hang out in rescue long enough, you will eventually hear someone say "I get into animal rescue because I don't like people". And others will snicker or whatever.

But in fact the opposite it true - animal rescue is still a PEOPLE oriented service group. Very few aspects of rescue will keep you away from people, though some will allow you to avoid the general public (and maybe that is more what they mean when they say that).

However, I think with that general mindset, some forget that people - the general public - are our most important audience. They share our posts on social media, they are donors, they are adopters. I think sometimes rescues act like they are doing the public a favor.

Of course, I've had people from the public act that way with me - as though I need to be even more grateful for their attention or ignore things on applications because "they are doing us a favor by adopting". Yeah - not how that works.

But recently I've seen a couple of instances where adoptions could have gone very wrong or not happened at all because of things that were handled badly. Rescues need to remember they can live or die by their reputation - and bad word of mouth spreads much farther and faster then good. I can't begin to tell you the number of people who have told me "bad" rescue stories.

Don't get me wrong - rescue is hard and sometimes you are catching people on a bad day. I've had it happen. But I think we all need to step back and remember that we are ALL human and we ALL need to get along and take a breath.

So if you are in rescue remember the public sees cute animals not the work that got them ready for adoption. If you are the public remember that rescue is hard and heartbreaking. Let's meet somewhere in the middle. 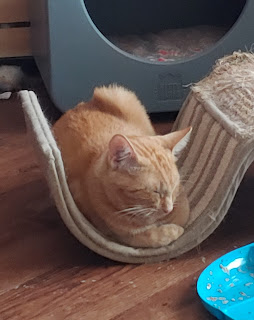