Did you dilute that torbie?

OK, I admit I can get a little geeky about cat facts. While I don't understand all the science behind it, the colors fascinate me.

So to start, to get an orange cat, the male had a red gene and the female doesn't. Male kittens from this pair end up being an orange tabby. You can get an female orange tabby about 25% of the time.

For female cats, you get a calico, tortieshell or torbie (calico with tabby stripes). About 1 in 3,000 can be male so they are fairly rare (and due to genetics to get the color tend to be sterile).

A "true" calico is orange, black and white. A "true" tortieshell is orange and black - no white.

Then you can get a dilute - a washed out version if you will. Dilute calicos will be peach, gray and cream while dilute torties will be gray and peach.

So then a torbie.....fiest let's talk about the name. I've heard this color variety called a callitabby, tabbico or torbie. Technically the first two would be more accurate as they are calicos with tabby stripes. A torbie would be a tortieshell with stripes - something I've never seen ( which doesn't mean it doesn't exist). However, the torbie term seems to be the one most commonly used though they are interchangeable. 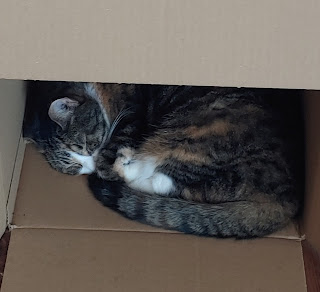 This is Ivy. She is truly a torbie: brown and black stripes, patches of orange stripes and white patches.
I had a friend ask me about Chickpea and if you could get a dilute torbie. Which would make genetic sense, but I had to really think about it. Honestly before Chickpea, I dint think I had seen one. But she is peach and gray and white with stripes. Tada: dilute torbie. 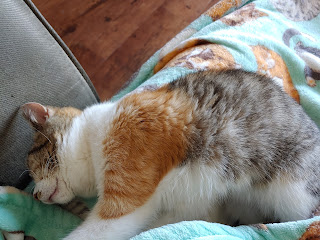 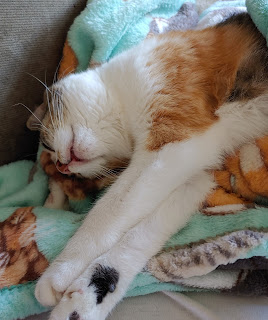 So there you go - my short geeky moment of calicos, tortieshells and torbies.
In case you want to read more, there is a good article on Love Meow
Posted by Random Felines at 6:23 AM

Email ThisBlogThis!Share to TwitterShare to FacebookShare to Pinterest
Labels: a post from the mom, cat colors, Chickpea, Ivy, torbie