When I agreed (ok - admitted) that Goldfish was staying and becoming a permanent member of the house, I knew it would be a challenge. 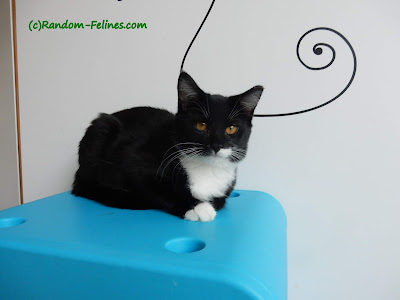 but look at that face!!

That girl had some serious trust issues. And honestly, I didn't want another situation like we have with Junior - where he lives here and is fine with the other cats but runs from me even if I just walk within four feet of him.

I was willing to accept her limitations if that is what it came down to, but I was hoping for more. I did get lucky in a couple of circumstances - she was younger than Junior when they both came here, and I know more about cats and ferals and behavior now than I did then. 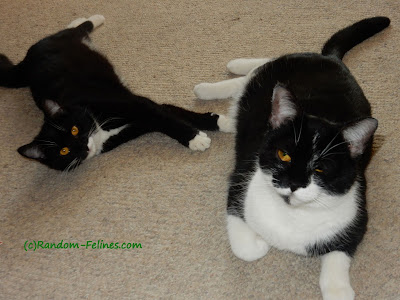 Crash and her minion

Without realizing it at the time, I got lucky on another front. Goldfish started to really learn how to be a cat once she was released into the house. OK - so she was learning from the resident weird cat (Chanel), but she was still learning. And...as much as Chanel is a little weird about some things, she is mostly fearless. She isn't afraid of people coming in the house, she isn't afraid of noises, heck she isn't afraid of the vacuum cleaner. Now if people come over, Chanel comes out and Goldfish will venture out slowly. I don't call Goldfish the "minion" for nothing.

Fairly quickly Goldfish developed a habit I have come to love. She followed Chanel up on the bed at night and then got pretty friendly with me so long as I was laying down. Then she started sleeping right NEXT to me. Now she runs into the bedroom when I head in that direction and jumps up on the bed looking for attention. I have even been able on more than one occasion to actually pet her while standing next to the bed.

I take it in baby steps and completely at her speed. I tried sitting on the floor this winter and offering her treats. She was pretty suspicious...it took her about 20 minutes to come very close and even then she wouldn't come closer than my ankles. I am going to keep trying though. The nice part is that she is food motivated so I have that in my favor.

But there was something new this past weekend. She came over and rubbed against my ankles. I reached over from the chair where I was reading and she rubbed into my hand (that is the routine - she has to bump my hand and then I can run my hand down her body - one hand only thank you though). She came over and we went through the routine for several minutes - until Daiquiri batted the toy out of the kitchen and then she was off and running. Check it out:

In case I was afraid it was a fluke - she did it again this weekend. She had been asleep on the cat ladder by the window. She woke up and when I called her name, she chirped and came over for some attention.

I doubt she will ever be a lap cat. No one here currently really is so she isn't going to learn that from anyone (Ivy will occasionally but not on a regular basis).

The one big concern I have with her is her annual vet check due in October. I don't want to grab her from the bed since that is our safe space. I do have gabapentin on hand and plan to put that in some food. Hopefully that will slow her down enough that I can catch her and get her in a carrier (without losing a finger). Hopefully she will forgive me for it fairly quickly. And yes....the vet will get fair warning.  haha
Posted by Random Felines at 6:30 AM