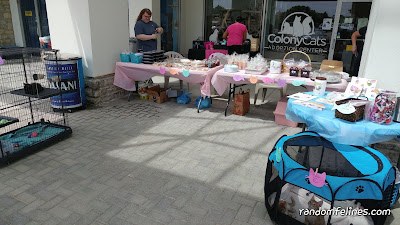 Mom was at the rescue's kitten shower on Saturday. There were lots of donations, baked goods and of course kittens for adoptions. They raised over $1,000 and there was (mom thinks) 13 adoptions, including 2 kittens at the shower and applications for 3 other kittens. Roomba went with mom though she didn't get an application but some good attention. Since there was some space, mom left her at the adoption center and we will keep you posted.
~~~~~~~~~~~ 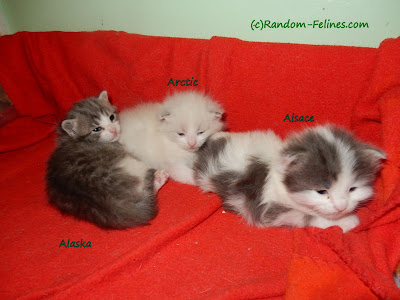 Of course since mom was there, she went wandering through the intake section of the rescue and saw these nuggets. And brought them home. They are about 2 weeks old so it was easy to take them as she can put them with their mom in the bathroom and they are easy care. 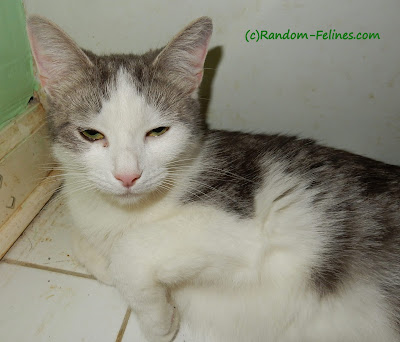 This is mom. She is very sweet and pretty calm. She did get a look at another cat at the rescue when she was in the carrier with her kittens and got pretty mad though. Since mom isn't sure what she is going to do, there is an "airlock" system in front of the bathroom door to keep us from sniffing too close and annoying the momma cat. She came with the name Anastasia the Third. 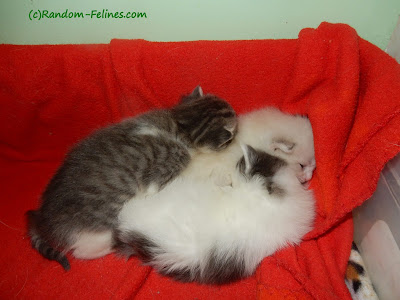 Mom decided to go with "A" names for the kittens. They are all girls and the one in the back looks like a meezer. The others are gray and white like their momma but only one has tabby stripes. You can see their names in the first picture, but mom went with Arctic (the meezer), Alaska (the tabby), and Alsace (white with gray spots). The kittens are very calm and don't mind being handled, which is great.
~~~~~~~~~

Cipher seems to be doing better though she had him nebulized again on Friday as he sounded really congested. Fate is his friendly self and Mopar is slowly coming around.
Posted by Random Felines at 6:30 AM

Email ThisBlogThis!Share to TwitterShare to FacebookShare to Pinterest
Labels: Anastasia and the As, kitten shower