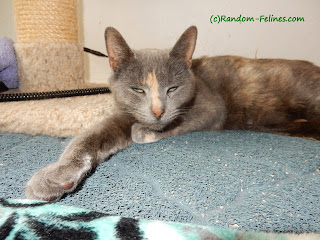 We reported on Friday that we had 4 cats/kittens still available for adoption. While we want all of them to get homes, it really is the momma cats that we cross our paws for sometimes.

Well.....Friday we got good news. Someone had applied to adopt Delphi - momma cat to the Greek Kittens. And they came in Friday to pick her up and take her home. They do have a dog so hopefully she will be OK with that, but we are all thrilled that she has been picked!!
~~~~~~~~~~~~

Friday when mom stopped at the adoption center, she and another volunteer were putting up a sign about a January adoption special. As they were working, a mid-sized orange and white tabby kept running around the floor, skidding into cats and other objects. After scanning him, they realized his name is Hemingway (though he is NOT polydactyl) and is about 6 months old. To amuse themselves, they got him on the cat wheel at the adoption center.....


~~~~~~~~~~~
Mom also did a rescue on New Year's Eve. She got a text from a lady she knows that they were hearing a neighbor abuse a cat. Arrangements were made and mom went out in the rain and picked up the cat. She is now safe with the rescue and mom is calling her Hope. She is pretty freaked out by all the other cats and the change of environment, but at least she is safe. The vet will get a good look at her once she calms down a little more. Mom did stop to see Hope on Friday and was allowed to scratch her head a little bit which is progress. Before you ask, we did think about fostering her and bringing her here, but she was pretty angry when mom tried to get her out of her carrier. She is actually better off at the center where she can be kept in a space where she is a little more contained. 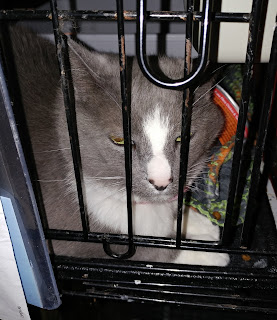