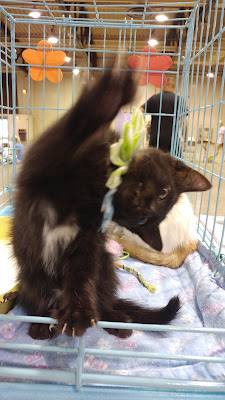 having a good time 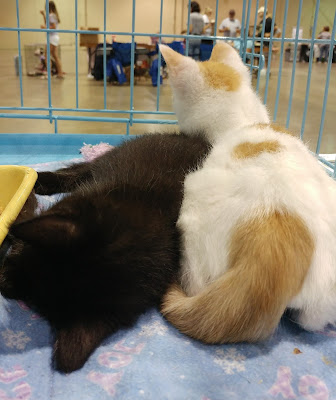 There was a local multi group adoption event on Saturday. It was sponsored by Pet Supplies Plus, a series of local pet stores. We have cats in 3 of their stores and set up a table at the event. It was their first try, so they need to work on some things, but it was a good first effort. Our group adopted out one dog and one cat, so it was good for us. Mom took Annatto and returned Myue to her foster mom.

Yeah...about that. Mom took Myue to the clinic on Friday. Turns out that "he" is a "she" and wasn't big enough for surgery. Oh well..... 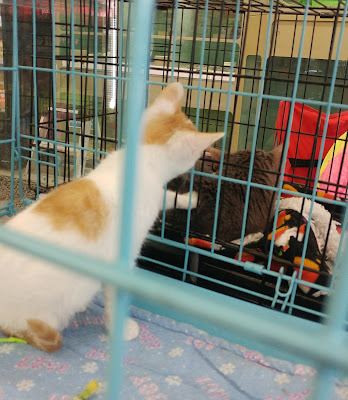 *poke*poke* Mr. Rambo??
Mom then took Annatto to another event on Sunday. The other volunteer brought an older mancat named Rambo who wasn't very interested in the young guy in the next cage.

Well, mom went to get her for surgery on Friday and Goldfish freaked out. Since she isn't ready to be adopted quite yet anyhow, mom decided to leave her home rather than have Goldfish freak out even more and do it at the clinic.

Mom did take her to the event on Sunday but Goldfish didn't come out of the carrier until they got back home.