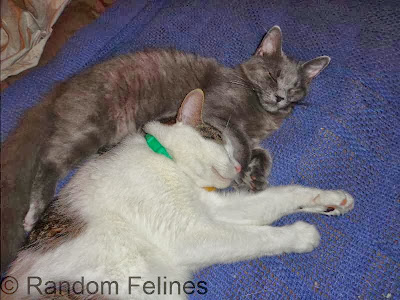 Tim was our kitten raiser from the time we took in a litter of feral kittens - one of whom was VERY sure that she hated mom VERY much. After some research, mom found an article from Alley Cat Allies about using an older neutered male cat to socialize kittens. Despite some doubts, it worked. Tim became christened "Uncle" Tim and helped raise many kittens until he passed away in March 2016.

Since that time, we have been without a kitten raiser. Tommy and Mozart were not interested in kittens at all. None of the girls care much either. Mom had some hopes pinned on Chanel, but she has been in to visit kittens since she joined us, but has never expressed any interest in them.

Well, with Annatto currently on premises and no other kittens currently available to keep him company (there are kittens at the rescue but mom won't take sick ones right now to put in with him), mom decided it was time to start actually looking. She has been thinking about it for a while and had been looking for a good candidate at the rescue, but hadn't made the jump to actually bringing any cat to the house. 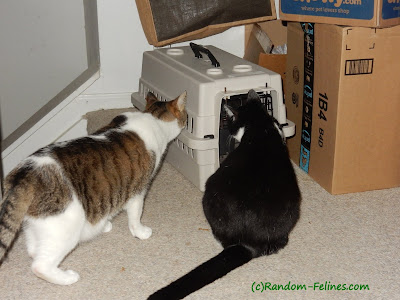 Yes ladies - there is a cat in that carrier. 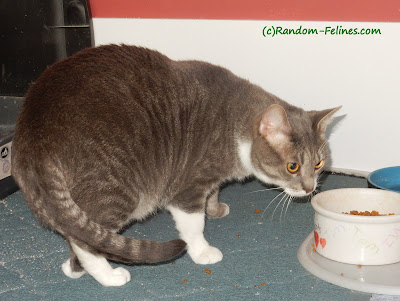 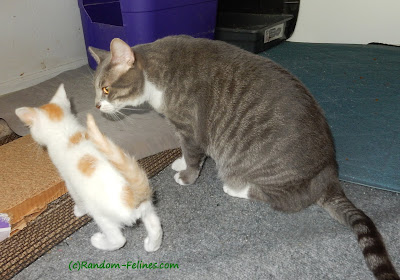 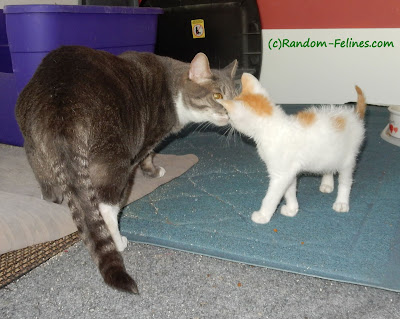 There were a few deciding factors:
1. Annatto HATES being by himself. Due to his size, mom doesn't want him running loose around the house. Due to his FIV+ status, mom didn't want to bring home sick kittens and expose him to anything either.

2. Mom has posted before about advocating for FIV+ cats. She knew it was probably time to put up or shut up, so our new candidate would be out of the FIV room at the rescue.

3. As mom started talking about this, a couple of different volunteers suggested Soda. One even showed mom pictures of him grooming a younger cat in the FIV room.

4. Mom was going to be home all weekend to supervise.

Mom got permission and cat-napped Soda on Saturday morning. He went right in to the carrier and didn't make a sound on the way home or even when the girls were sniffing him in the carrier. He came right out and checked out the foster room. Annatto isn't sure what to think about him, but Soda has been very patient with the kitten currently nicknamed "Catzilla". MOL There was some whapping on Monday night, but Annatto had jumped on Soda's tail for about the 4th time before Soda decided to put Annatto in his place.

Soda hasn't met everyone else here yet and if he stays that probably won't happen for a couple of weeks. Mom suspects it should go pretty smoothly. Though she did get a laugh when late Sunday night Daiquiri was over by the doors to the foster room and hissed....not sure why it took her about 36 hours to realize that mancat was in there.

No definitive decision yet, but he seems to be aceing the interview process so far.
Posted by Random Felines at 6:30 AM