1. The Sleepypod carrier is great, but crate was a good idea. Mom put up a small wire crate in the backseat of the Escape. It gave Chanel a little more room to stretch out, access to water and a litter box, and allowed her to see out more. 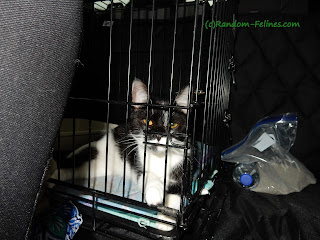 2. Water Faucets: mom keeps the bathroom door shut here at the house. It started when that was where the foster kittens were kept, now it is just habit and allows mom to leave stuff laying around that she doesn't want us getting into. So she had NO idea that Chanel was into water.

3. Litterbox location is more important than you think. The last couple of conferences, the cabinet in the bathroom was far enough from the floor that the boxes fit UNDER the cabinet. Not so much in this hotel, so we needed a new configuration. The picture below seemed fine....until you realize that the tub faucet had a slow drip....and both tuxedo kittens liked to play in the tub..... (the clay litter got moved to the other side by day 2). (and yes, we left a very nice tip for housekeeping) 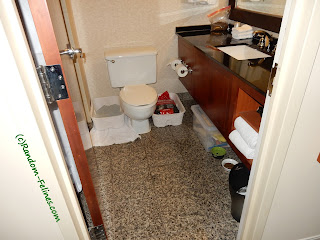 4. More space is better: we knew that re-introducing Chanel and Cupcake could go either way. Fortunately, there was some hissing but nothing much further than that. And on Tuesday, Aunt Dee (who adopted Calais from us) showed up and was in the adjoining room. The doors were left open and having a little more space cut down on some of the name calling at 2am.

5. That dumb stroller is handy. Keep in mind that mom hadn't used it much before leaving for the conference. Turns out that Chanel LIKES having her own ride....and it certainly made it much easier to take her around the hotel and conference (plus there was room to put stuff underneath). 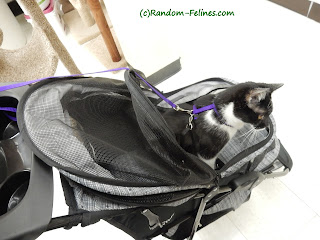 7. Adding to your list is OK, though remembering before you leave is better. After some thought, a pheromone diffuser might have come in handy. And while mom actually BOUGHT a night light in Nashville, she forgot to pack one. If she is going to leave the plastic box packed with some basic essentials, she needs to get one for the box.

8. Start using a blanket for trips and bring it with you. Cupcake has a blanket that she takes to Starbucks and that Miss Julie brought on the trip. It gave her a safe landing place both in the hotel room and out in the hotel.

Overall, it really was a good trip. Mom made sure to bring a scratcher for Chanel since she not only uses them but likes to lounge on them. The Sleepypod was a nice safe space to have in the room as well. More than once mom came back to the room and Cupcake was asleep on her blanket on the bed and Chanel was in the Sleepypod. 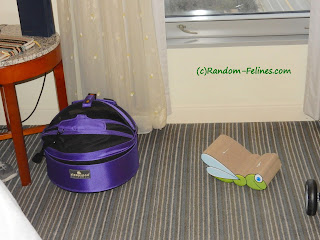 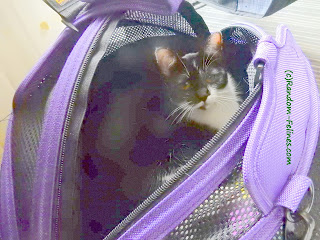