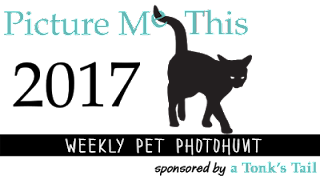 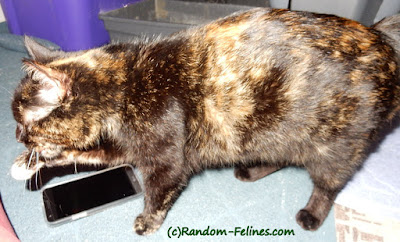 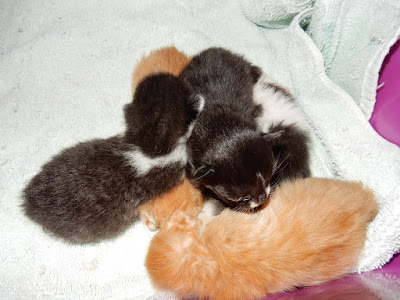 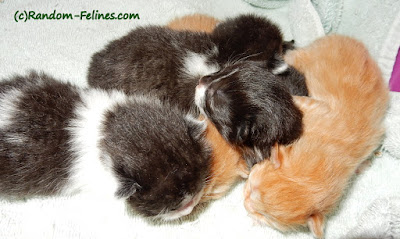 The momma cat was seen running around about a week ago....and then they found her again over the weekend. She had kittens in a window well - so NOT a good place. It is early kitten season here so the rescue had an open spot and we were in the running. (actually, mom did some running around for the rescue on Sunday and told the head lady she would take payment in kittens - MOL). Mom got a text Monday afternoon at work and they spent a couple of hours at the office in a crate before mom could get them home.

Mom was sitting at work and the name Millicent came to mind for the momma cat. Normally we don't use people names for kittens, but we have for momma cats before. Millicent is a beautiful tortie girl...we suspect not very old. Five kittens: 2 orange and 3 tuxedos. 3 boys, 2 girls (two of the tuxedos - both orange tabbys are boys) Which is a combination we don't think we have ever had before.

We were told they were born over the weekend, but their umbilical cords have fallen off and there was one open eyeball Monday night, so they are closer to about a week old and we are going to give them birthdays of 3/28/17.

Momma cat was pretty sweet Monday night, but it had been a long day for her and when mom went back in a second time to feed her again, Millicent hissed a couple of time, was a little growly and put her teeth on mom's hand. Mom didn't move and gently told Millie to let go and she would get some space. Millie let go without leaving a mark and mom left the foster room. She checked on them throughout the night and all was well.

The web camera is up and running though mom did realize that they are in a dark part of the room. She had bought a clip on lamp but then discovered the shade was metal and didn't want to leave that on all the time at the house in case something happened. So she is going to have to do a little shopping to find a better alternative.
Posted by Random Felines at 6:30 AM