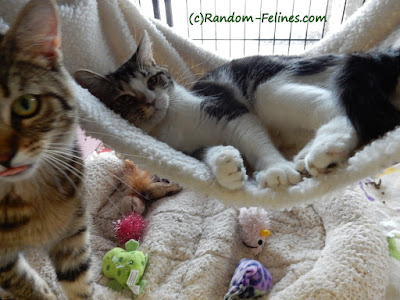 Liberty and Freedom are still at the store. Last week one of the volunteers brought a hammock in to put in their cage. It has been occupied ever since. MOL When they were first here and in the tower, there was a hammock and Freedom loved it, so we really shouldn't be surprised. One of the assistant managers at the store said that when it was put in their cage on Saturday, Freedom spent most of the day in it and would NOT let Liberty join her. Since then, they trade back and forth and will both climb in there together as well. They are getting a little stir crazy in that cage and Freedom has attempted to get out a number of times. We've had a couple of applications, but both have imploded for different reasons. Hopefully we can get them adopted into a forever home very soon. 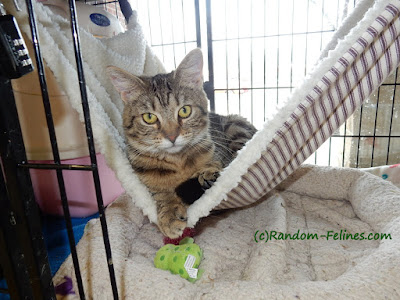 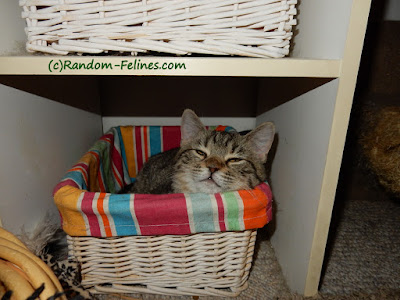 Some comments about our Tuesday post on fostering and supporting rescues:
- If you didn't see it, Summer over at Sparklecat did a post featuring our friend Miss Connie from Tails from the Foster Kittens and mom.
- Eastside Cats mentioned that they collect old towels and blankets for their rescue.
- Eileen mentioned that she donates and also encourages spay/neuter.
- Momma Cat and Bear said they didn't think they could foster since they would fall in love with every foster cat/kitten. We hear that a lot - in fact it may be the most asked question - how do we not keep them all? The simple facts are these: you HAVE to know your limit. And if you keep them, then you can't help that next one that will need you. Raise them right and help them move into homes of their own where they are the center of attention and that clears your space to help the next one in need.
~~~~~~~~~~~~~~

Have a great weekend!!