Chambord was spayed on Wednesday. Common weight gain belief for rescue is that kittens gain about a pound a month for the first few months (not sure what the cut off for that is). For comparison, Dandelion is just over 8 months and weighs just over 9 pounds. Miss Fuzzypants is just about 4 months old....and on Wednesday weighed a whopping 2.8 pounds. Sheesh..... good bet she is going to be little. The techs at the clinic all loved her and there was a threat to kitten-nap her (which is never taken seriously....like most vets and techs, they all have enough pets). But they were all impressed with her coloring, her floof and her sweet disposition. 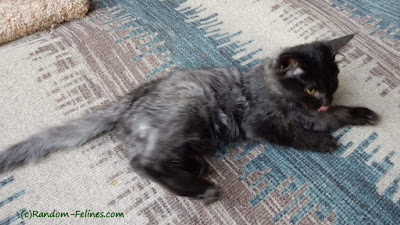 ~~~~~~~~~
Dandelion seems to be doing somewhat better. He slept on the bed the other night - snuggled right up next to mom - and she said he wasn't noisy at all. That being said, he was kind of snorty last night. The v-e-t recommended adding lysine to his diet and we are trying that....figure it can't hurt.

Oh - and it seems after a few weeks of chasing Daiquiri up and down the stairs as she plays fetch (and occasionally stealing her toy), Dandelion MAY have figured out the game. Wednesday night Daiquiri brought over the ball and chirped at mom to throw it. Off she went...followed by the orange dingbat when he heard her thumping down the steps. Daiquiri brought it back and they played a few rounds. Mom felt the ball drop next to her ankle but Daiquiri was laying in the middle of the living room. Mom looked down and there sat Dandelion, who looked at the ball and then looked back at mom. She threw it and he brought it back. She threw it again....and he came back up the steps and ran down the hall with the toy. But he may have the basics....  MOL

No applications on the patriot girls yet. But they are doing very well at the partner store. We don't doubt that they would love to be out and running around in a house somewhere....maybe Santa will bring them a forever home for Christmas.

Stay safe and stay warm. Purrs
Posted by Random Felines at 6:30 AM