Mom ran errands on Saturday morning and then left for a few hours in the afternoon. This is Pearl. She had previously been adopted and was a "victim" of divorce and a new girlfriend. A couple stepped up to take her as a foster to adopt and mom got to meet them as the final hand off. Pearl is a sweet 6 year old girl and after talking for a few minutes, mom bets this is going to be her new family. 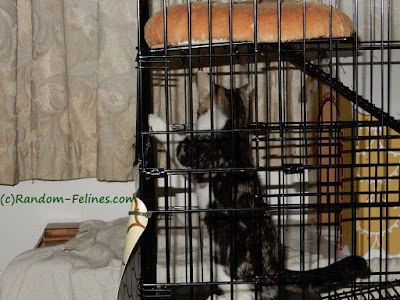 Freedom is in the tower by herself now. She is pretty snotty and mom didn't want Liberty getting sick too. Also, mom was hoping that separating the girls would help with their socialization. Freedom, despite being caught several times per day to have her nose cleaned and be medicated is doing better. 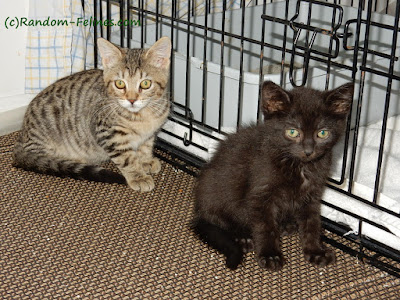 Liberty is now living in the foster space. This is her hanging with Barley. The boys are smaller, but they hold their own and find Liberty pretty fascinating. However, Liberty is still pretty skittish around mom. 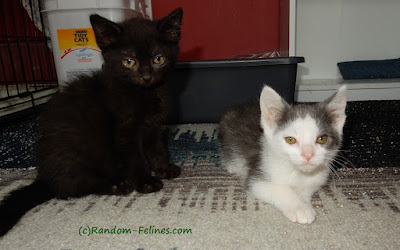 Barley and Hops are doing well. Healthy and very social. Mom weighed them and they are just under 2 pounds, so another couple of weeks and they should be ready to go. Which means, based on the clinic schedule the last time mom called, she should schedule these two soon. 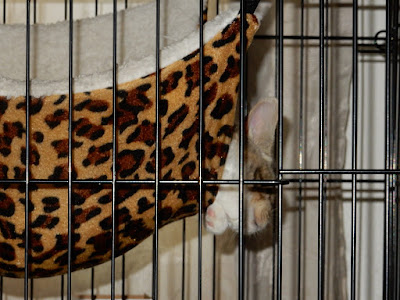 Freedom discovered the hammock in the cat tower. She spends most of her time sleeping in it, but will also hang her head over the side. Not sure if it is just comfortable or helps her breathe better.
Posted by Random Felines at 6:30 AM