*a post from the mom
Some of my friends know part of this story, but here is the whole thing.

Just over a couple of weeks ago, a friend I volunteer with mentioned that she had seen some kittens on a construction site (she works for the city water department). We talked about options and I offered her my trap to catch the family. I figured a rescue that focuses on TNR would be a good fit and that under the circumstances I would be ok getting permission after the fact. And I got the go ahead a couple of days later.
Unfortunately the mom cat moved the kittens, but after several attempts (and keeping in mind my friend isn't on site every day so that slowed everything down), the kittens were found last Tuesday (a week ago now) and the mom cat was caught later that day.

Mom is tiny, black, fuzzy and feral. No doubt about the feral thing either.... the hope was maybe she was scared and had been abandoned, but she has been calling me names from the start.

The mom cat got flea meds on the way to the house and the kittens got a bath once we were all home. They are SO tiny....their teeth are coming in and based on the timeline, they have to be at least a month old. I know this is going to be a battle. 3 black kittens, 1 gray one. There was a fifth one, but a driver had seen the mom cat drop it as she was presumably moving kittens over a week before we caught the rest of the family and took it home with him - their family has had bottle babies before and I got an update last Thursday that the kitten is doing well and they are going to keep him (or her).

Tuesday night was a long one. The gray kitten started going downhill and I pulled him out. I sat with him and tried to warm him up and get him to eat with no luck. I finally took him into the bathroom where I had moved Marilyn and her kittens when I put the feral mom in the large crate. Marilyn took to the baby right away, but I knew his chances were slim. I kept checking on everyone during the night. It is hard to get a feel for the other kittens since I can't really see them if they are curled up with each other or with mom - it is just one black blob.

Unfortunately, the gray kitten passed away Tuesday night. Considering his condition, I wasn't surprised, but it still hurts to know that I couldn't save him.

Wednesday was a long day. I tried to move the web cam so I could see in the crate, but managed to actually disconnect the camera somehow, so that was a bust. (it is back online now [more or less] and I am NOT moving it ever again - haha) I work about 20 minutes from home (if traffic is moving) so running home at lunch isn't an option.

I pulled up the sheet covering the crate and 3 little black kittens were walking around and started meeping when they saw the light.

I put my head down on the crate and took the first deep breath of the day.

They still may not make it. I know that. They are so tiny and fragile. They are older than Marilyn's kittens but about about half their size. I will have an update later in the week as decisions are made about how to keep them going. The issue for the moment is that I can't reliably get my hands on them since their momma is very freaked out.

Oh - and as for mom....there is another city site that actually built a shelter for their ferals (YAY). Mom cat will be spayed and ear tipped and moved down there. Ideally she would be taken back to her original location, but this other site is much safer and she will be watched over there as well. 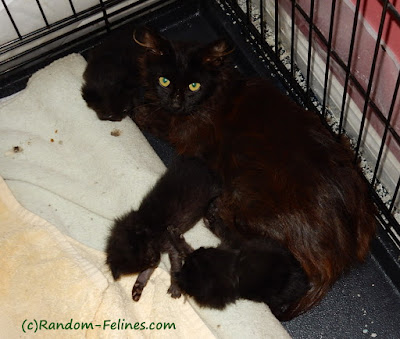 the name Fiona has been running around in my head,
so that is the name mom will have from now on
No names for the kittens yet....
Posted by Random Felines at 6:30 AM