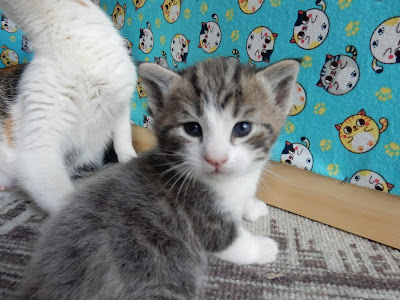 and kind of monster sized....mom weighed everyone on
Sunday morning and this beast weighs over a pound already 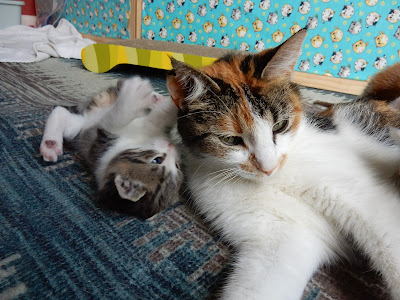 We mentioned last week that mom had some concerns about the structure of his chest. Our v-e-t took an x-ray on Friday afternoon and did make the comment that he does seem to breath more rapidly than normal. Mom had noticed this when she was watching him nurse and that prompted her call.

Dr W had a friend who is an orthopedic doc look at the x-ray. He didn't see a hernia or anything like that. He did say that baby bones are tough to see on x-ray since they don't have as much calcium as adults and therefore don't show up quite as well. He did think say he thinks Muscari's heart looks enlarged but also that that is above his pay grade. Dr W is going to ask a favor of a cardiac vet she knows and see what he says. However, she did mention that most kittens with heart defects tend to lag behind in growth and tire easily. Ummm....we don't think he got that memo. Though mom agrees that he does sleep awfully hard - she has freaked out a couple of times walking in there and he is out cold. :)  We think he is just messing with her.

For now there isn't much that can be done but keep an eye on him. They will be a month old on Wednesday so no real rush unless he appears to stop thriving. Until we have a prognosis, mom says she isn't going to freak out about it since he sure seems to be doing well.

Notice toward the middle Amaryllis starts leaning into the camera - the strap was swinging around and she thought it was fascinating  :)
Posted by Random Felines at 6:30 AM