Starting Friday afternoon, mom released the spice kittens. Which means we are now officially outnumbered... for those of you keeping track, that is 8 KITTENS running around here. HALP!!  :) Normally we don't have quite that many around (unless it was a BIG family) but London can't seem to shake the snot and the TNR kittens were an add on (by the way - mom 'fessed up to the rescue lady that we had them and her response was an eyeroll and "I knew" oh well....so much for that - at least mom isn't in trouble).

Surprisingly, all the kittens integrated very well. There was some minor name calling and the TNR kittens still howl like brats when they are playing, but otherwise there was lots of running around and toys flying and then piles of snoozing kittens. The spice kittens seem to be doing well...we aren't entirely sure what was causing their issues, but the meds and some Forti Flora seems to be helping.

London, Tamarind and Tumeric were all neutered on Sunday. A local mobile clinic was out and did surgery on 35 cats for our rescue!!  London appears (again and again and again) to be a little snotty, but when there is space the other two boys will go to the adoption center. The girls and the TNR kittens aren't quite big enough yet. 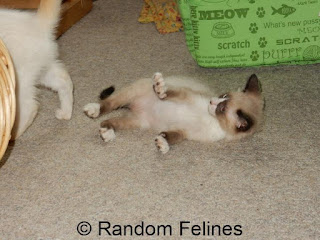 mom didn't realize how funny this picture
appeared until she got it up here.... 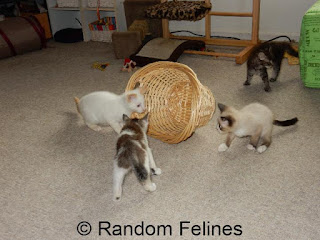 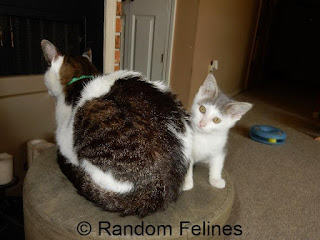 Mom drove a bloodhound transport on Saturday morning. Since her next stop was an adoption event, the 3 boys went with her. Ginger the hound didn't even seem to realize the kittens were in the car (and it wasn't like they were quiet or anything).

After laundry, some cleaning and running around, mom took Sunday afternoon to relax and even got in a nap with Topeka, Anise and Cinnamon snoozing with her.
Posted by Random Felines at 6:30 AM