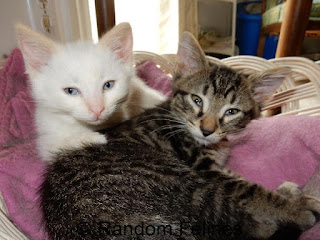 Good news!!!
Cairo was adopted on Sunday. He was actually neutered on Saturday and when mom stopped in to check on him Sunday, he was still on the intake side of the rescue. She went and brought him over and put him in with Blanco (which resulted in some minor name calling...silly boys). Anyhow, there was a family there looking at kittens, and the daughter fell in love with the boy. Mom left before they made a decision, but found out Wednesday night that Cairo went home that same day!!

In other city kitten news, London is doing much better and mom is going to try to get him in to be neutered next week. Of course now that this is in print, we are sure he will spend the weekend sneezing on the mom. He has been out 24/7 and enjoying himself. He has found his favorite spot to sleep at night - right on mom's pillow.
~~~~~~~~~~~~

The other little kittens are doing well though not gaining weight as much as mom would like. We have given them a couple of different meds and tried some different foods. We shall keep an eye on them. The TNR kittens get out at night when mom is home. Mom tried putting the gate up for the spice kittens but Cinnamon can climb over, so they won't get much free time until this weekend....and boy won't that be fun. (or not...holy moly)
~~~~~~~~~~~~~~

We currently have the hots here again so thank heaven for the a/c and the cold air vents. As far as we know mom doesn't have plans for the weekend, so other than her regular chores, there shouldn't be too much more excitement than the regular kitten chaos.
Posted by Random Felines at 6:30 AM