Mom was going to post about a 7 year old boy at the shelter where she volunteers. Aiden was brought in as a stray. Not neutered but super nice and very handsome brown tabby. She spent some time with him last Tuesday night and he was happy just to sit and have his ears scratched. 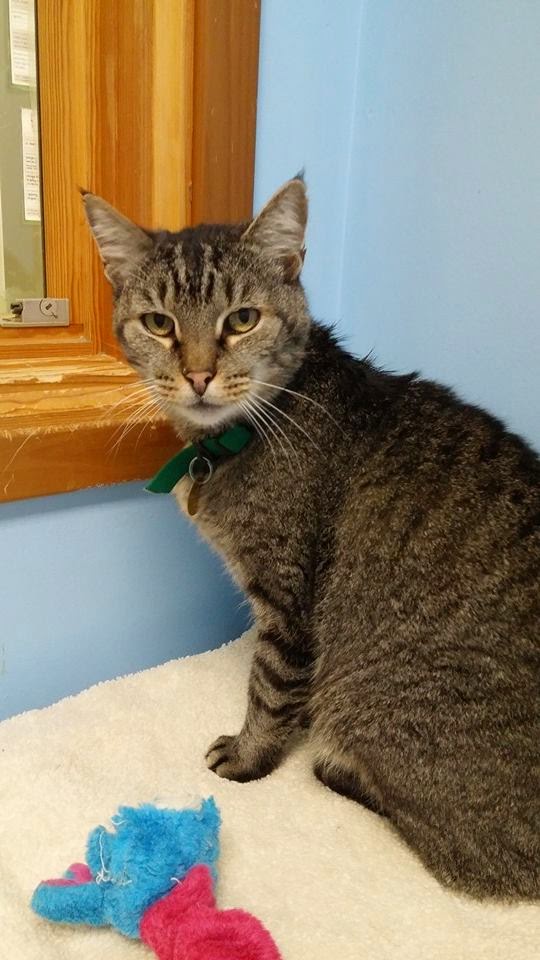 But then something happened last Thursday on the night when she volunteers that she wanted to touch on....and it involves Aiden.

Any reputable rescue has a return policy. And ask anyone involved in rescue how they feel about returns, and they will more than likely roll their eyes. Cause we have all heard the "had the kitten for 24 hours but it was too active" story. Or "we had the cat for 2 days but it wouldn't come out from under the bed" story. "We're moving". "We're pregnant". Whatever.....rescuers tend to get a little cynical cause we have heard it all and then some.

But what about legitimate returns?  When the adopters have tried everything, asked for help, tried some more and it still isn't working? Those are returns that, while we never like to see animals come back, we understand.

Such was the case last week. A very nice lady brought back a cat they had adopted about 3 weeks before. He got along great with the family. Loved the family dog. Terrorized the 7 year old female family cat. They had done the introductions right. Tried separating them and introducing them again. Nope - he stalked the older lady cat and was making life miserable for everyone. The lady said over and over she felt so guilty but didn't know what else do to. Mom got talking to her and assured her - the pets in the house have to come first. It isn't fair to resident animals to be terrorized in their own home.... so mom took the boy back and set him up.

When mom came back up front, the lady was still there. She wanted to rescue and adopt but was now concerned about doing the right thing. Mom smiled and took her to meet Aiden. It was love. Now, since most people bring back and animal and run, no one was sure about doing an exchange. So an email was sent and the director responded the following morning that everything sounded fine and she would contact the woman.

So it isn't always about the first pick....but about the right pick. And like dating, it may not always work out on the first try. Good luck Aiden - we got a good feeling about this.
Posted by Random Felines at 5:30 AM

Email ThisBlogThis!Share to TwitterShare to FacebookShare to Pinterest
Labels: opt to adopt