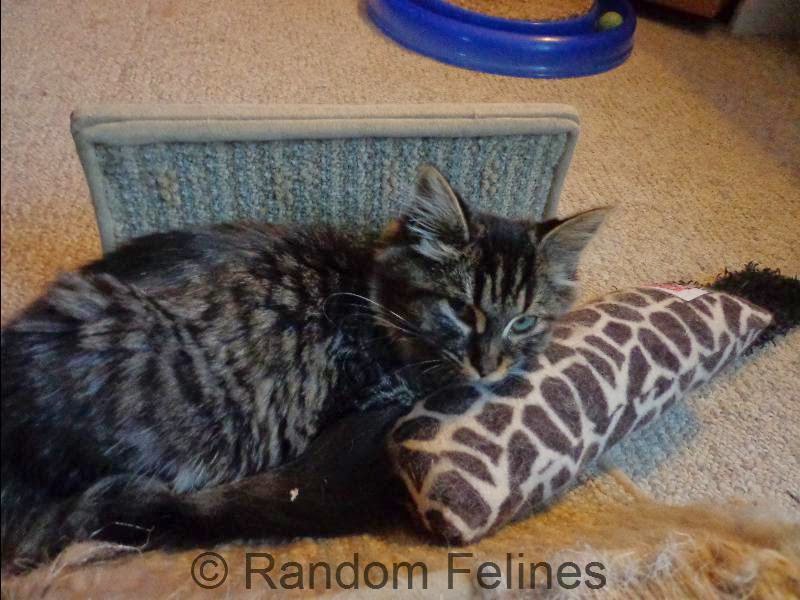 Our tiny chick is having some issues.

Mom had a check up appointment with her on Sept. 18th. She officially weight 2 pounds 14 ounces and charmed the vet and techs. No idea what her heart sounds like - she never stopped purring. Though mom said later they should have tried at the end of the visit....Coral got her pantaloons trimmed and was NONE too happy about it.

However, mom came home last Wednesday (Sept. 24) and Coral was staggering down the hall and fell over twice before mom could get to her. Mom called the vet in a panic and they said bring her right in.

When they got there, the vet suggested drawing blood to check her glucose level - IF it was not normal (mom can't remember if they were checking for high or low), it might be a shunt which would explain all sorts of things. It was normal. But her temp was 104. So they gave her fluids (she was NOT happy about that), antibiotics and a shot for the temp (no, mom can't remember what that was either). The plan was to take her home, keep an eye on her and make sure she kept eating. She weighed 2 pounds 11 ounces.

Over the weekend, Coral was sort of eating, lethargic and felt kind of warm. By Monday mom had enough of that and called the vet again. They agreed to have mom bring Coral to them on Tuesday morning and have her spend the day. Maybe IV fluids, more drugs, keep an eye on her. The big concern was that her head trembles slightly at different times.

Mom dropped her off Tuesday am and waited....and waited....and waited. Once the the vets just adopted a new baby and she knows they were busy. But by 2pm she couldn't stand it anymore and called for an update. They didn't do IV fluids, electing to give them under the skin. Coral was eating however she was running a temp again. The vet was in with a client.

When Dr B called, they went over the options. Here was the final decision: send her home, keep her eating. Run bloodwork to see if anything else is going on (and start maybe seeing if there is a reason she is still so tiny). In the meantime, the vet suspect toxoplasmosis (see what Cornell Vet has to say about that here) so we are trying a new antibiotic. There is a titer test that can be run and mom said do it - better to know than not know. If the drugs work and it is toxo (and Coral responds like she should), we should notice an improvement by Friday or Saturday. The good news was, despite mom saying Coral felt bony to her, she had only lost an ounce since last week (although at under 3 pounds, she doesn't have an ounce to lose).

If you could be sending her some purrs, we sure would appreciate it. Once the vet calls with some updates and results, we will keep you posted.
Posted by Random Felines at 5:30 AM