With Chex being adopted, there was an open cage at Petco. Mom conferred with Miss Beckie and they decided to help out our rescue vet and take this handsome mancat up to the store. 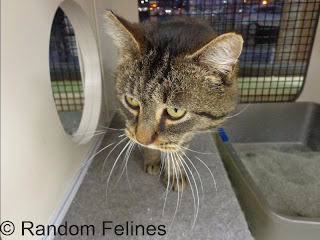 He is about a year old. Mom isn't sure about the entire story, but here is the part she has gotten.

A couple moved into a home in the country and this cat kept coming up to the house. When it was SO cold last week, they let him into the house. They also contacted another local rescue and was told to take him to the vet that both rescues use. The vet tested him (negative for both FeLV and FIV), vaccinated him and neutered/microchipped him. They have four cats (well now three after Saturday) living in the clinic. So Miss Beckie suggested that we help out and take him. So Friday after work mom picked him up from the vet and took him to Petco. He is a little scared and shy but likes people and we know the clerks at Petco will have him outgoing in no time.

Here's the strange part. Miss Beckie called mom on Saturday to ask about him. Apparently the lady who brought him in had called the vet clinic and wanted him back, but they were going to let him outside. The vet said that he is friendly and deserves an indoor forever home. If the couple wants a barn cat, the vet could put them in touch with a rescue. In the meantime she told the lady, our rescue had him and would try to find him a home. Not liking that answer, the lady called the rescue and left a message for the head of the rescue. Oops....Miss Beckie and mom kind of hadn't told Miss Mona about him yet.....  MOL

However, Miss Mona said the same thing - if you want a barn cat fine, but you can't have a nice friendly cat back if you are just going to toss him back outside. Besides, after leaving him at the vet, the lady sent the vet a text saying "you can keep him, we don't want him back". Works for a release for us. And gotta love the vet lady - she said if the woman gives her a hard time she can pay the vet bill first (and at about $500 for the test, surgery, vaccines, revolution and boarding, we suspect she won't want to pay). 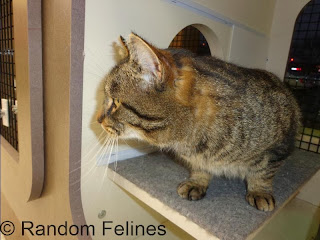 So, Snapdragon is safe with us and looking for a loving forever home....with a nice warm bed for him. 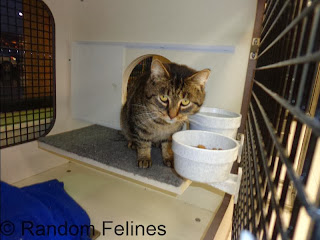