Well it was an adoption weekend at Petco so mom decided to be there both days due to the fall season and trying to get some adoptions. We didn't have any adoptions, but mom talked to lots of people, got some donations and talked to potential adopters that might come back or go to our adoption center. Plus she said it was "old home" week as she got to talk to Cheerio's mom, the couple that adopted Cooper and Ashley, the lady (and her big dog) that adopted Jonny, and the couple that just adopted Luke - who said he came right out of the carrier and moved in like he has always been there. Plus on Sunday, the lady who adopted Busch and Miller came in so mom got to see pictures of them, and since she is related to the lady who adopted Sierra and Sebastian, mom got to see pictures of them too (everyone is getting so big - and Sierra appears to be slightly crossed eyed). Both of them like us on facebook so we hope to see some updates. 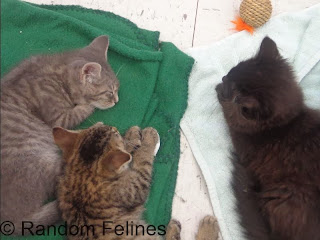 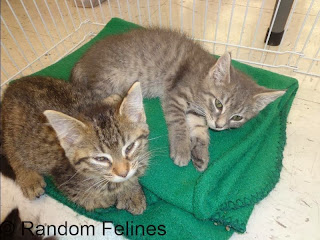 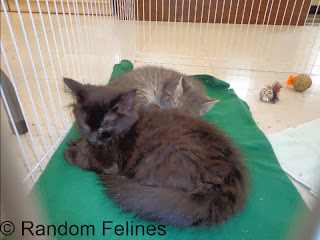 Friday afternoon mom moved Basil and Saffron from the bathroom to the playpen. They haven't been out yet, but Amelia finds them fascinating. 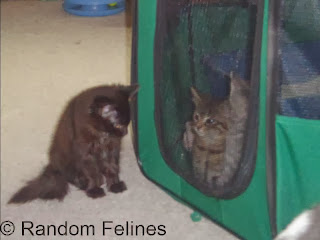 Yes, Amelia is ON the playpen in that first picture.

Amelia was in baby jail with the kittens at Petco and was great with them. Since Friday night Amelia has been out and about with us all the time. Mom let her out way early on Friday am when Amelia decided she didn't want to be in the playpen by herself. Amelia spent part of Saturday night in there with the kitts (she wanted the canned food) but in the middle of the night was crying to get out. She hasn't been too bad to sleep with so far.  MOL
Posted by Random Felines at 3:00 AM