Mom had yesterday off. She has vacation to use so is taking off Mondays here and there.

But there was a plan for yesterday. Junior had been dragging his behind on the carpet and our vet tried to help him but he was too squirmy and tried to get away. Mom asked the vets who help the rescue if she could bring him in and have him knocked out. They said fine so mom made the appointment.

It took mom about 20 minutes to catch him and get him in the carrier. And she suspects the neighbors may think she was killing him cause that boy can yowl!!! 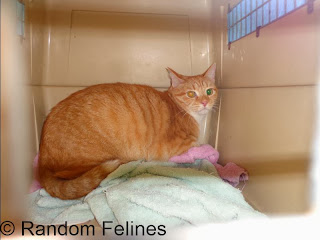 As you can see above, he was THRILLED to be going. But mom threw a blanket over the carrier and he didn't even sing any warrior songs on the car ride. 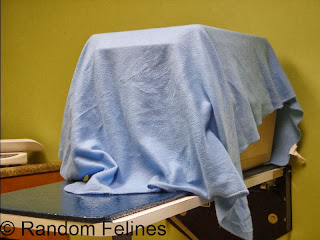 Mom left the blanket over his carrier to keep him calm. Mom says she would never suspect him of being a bite risk, but he is a runner.

So the vet tech Rob came in and they gave Junior the once over in the carrier (no reason to open the door until you have to). Our vet said she thought he weighs 13 pounds. Mom and Rob agreed he looked bigger than that and guessed about 15 pounds (cause even our vet admitted that it may not be accurate as Junior was trying to get away). So they get everything together and shot him in the butt. Less than 2 minutes later and he was out like a light.

As she was waiting to check out, she and Rob stood there talking. Junior was banging around in the carrier and Rob went and got an extra towel and a couple of pillows and they tried to pin in him so he wouldn't hurt himself.

They looked in again a couple of minutes later and....he was having a seizure. Grabbed the carrier and ran for the room with Rob yelling for the vet. It stopped pretty quick (though Rob and mom probably won't need coffee for a couple of days). The vet said it can be a common reaction to Ketamine but she wanted them to stay there for a little bit. They got him on a blanket and under a towel and mom sat next to him. Junior got up at one point and was banging around the room so mom wrapped him up burrito style and sat with him on her lap.

When she finally left (2 hours later), he was still pretty hung over and wobbly, but not nearly as bad. Mom did say she was glad about the nail trimming though as at one point he dug into her leg, into one arm and used his back foot to try to push out of her lap and his nails ran down the entire length of her hand - had those nails been sharp it could have been pretty ugly. 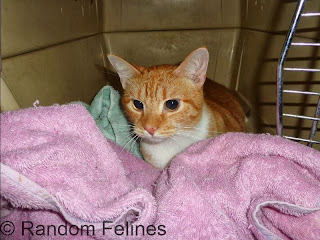 Mom and Junior got home several hours after leaving. Junior is sleeping off the drugs and was let out later that afternoon. And there is a big note on his file (and mom will be sure to tell our regular vet as well) about the drug reaction (though they also suspect that giving him more than he really needed for his size didn't help).  Oh and his weight? 13.1 pounds. Weird - we would swear he had to be bigger than that. The vet did call later that afternoon to check up on him and was glad he is doing much better.

Mom does say this: while she isn't happy about the drug reaction (though better to find out now), she said it was a nice change to be able to sit in a quiet room with Junior all snugged up in her lap and to be able to pet him and scratch his ears. Normally our semi-feral boy doesn't let mom touch him - so having about 90 minutes of one on one contact was a nice thing for mom.
Posted by Random Felines at 6:00 AM