With some adoptions and some kittens moving to Petco, mom knew we would have some room. So Sunday she sent a text to the head rescue lady asking if she had any littles in need of space. Of course....  So mom went over and came back with a full carrier.

The two bigger kittens are just waiting to gain a little weight to have surgery. And of course the tabby boy is a little sneezy (that started on the way home - it's like they know). They came in at the same time with two separate moms and other kittens. Everyone else is big enough to be adopted but these two. With the way they came in, they aren't sure if the boys are related or not, but they came together. 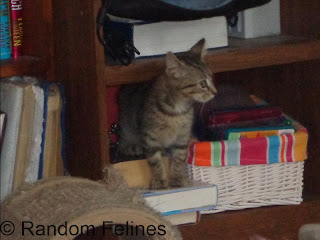 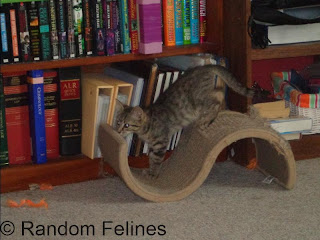 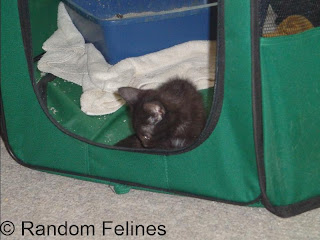 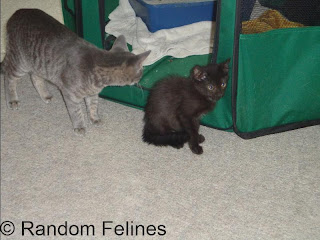 That's Elwood sneaking up on the new guy.

There was a little tiny fuzzy girl that had just come in. Mom said "sure" so she came with as well. She is MUCH tinier and with the fuzz it is hard to tell, but she will be here probably 3-4 weeks. 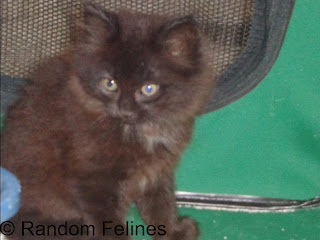 They spent Sunday in the play pen in the living room. Licorice is still in the bathroom (hopefully some news on her next week).

Monday afternoon mom let them all out. The boys came out first - and were promptly promoted to the status of "cat toy" for Jake, Elwood and Oliver. They also discovered the top of the play pen. The little girl, took another hour to come out on her own, but eventually came out and joined the fun too. It was a party with the 3 smaller kittens, 3 bigger kittens and Junior!!

The little girl was tested on Tuesday (all good) and they needed a name for records. Now, you know us - we love a good theme and not a fan of people names - unless we are using famous people. So, our little girl is now Amelia (after Amelia Earhart) and the boys are Goose (black male) and Maverick (brown tabby male).

Although, the tiny girl is....um....fiesty. Sure, we'll go with that. Mom flipped her on her back the other day and was scritching her....Amelia laid her ears back and growled at mom. snicker....  So now she is also known as the "angry dust bunny".
Posted by Random Felines at 6:00 AM