So Licorice has been out and about more. She was supposed to be spayed last Friday, but that didn't happen. She still has some hot spots from chewing. She is on another round of antibiotics. Mom has a cone but is hoping she won't have to make Licorice wear it. Licorice is still a little growly with everyone here....and mom puts her in the bathroom at night (mainly cause mom is afraid Licorice will get in the bedroom at night and not come out).

Well, she has one spot that looks much worse. Mom tried to put the cone on her this morning. So far the score is Licorice - 1, Mom - 0.

Mom says we are pretty good with her.....Licorice is now over 6 pounds - which is 2 pounds over where she was when we found her. So it is all good. Just gotta get her spayed and get her available for adoption.
~~~~~~~~~~~~~~

So an update on Nasa/Hubble and Orbit at the shelter. 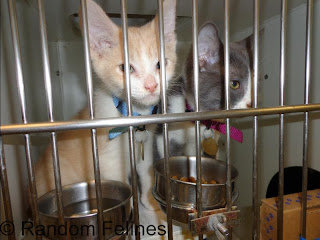 Mom noticed a new sign on their cage Tuesday night. It pretty much said that they think that the Science Diet fed at the shelter appears to not agree with their stomachs and that they should eat something different once they are adopted but it is too hard to feed separate diets at the shelter.

Pffffftttttt.....  Mom is afraid the sign may scare people off. And she also thinks it is more Nasa than Orbit. Mom wants to add her own sign "and I wouldn't feed them Science Diet anyhow".
~~~~~~~~~~~~~

We may have some exciting adoption news on Monday. Oh, and we put a teaser on facebook about a newbie and didn't follow up - mom says it has been one of those weeks....stay tuned.  :)
Posted by Random Felines at 9:19 AM