So a few weeks ago (our lives have been nuts recently, what can we say), we got an email from a nice lady from Primal Pet Foods. She wanted to know if we would be interested in doing a review for them. So we went over and checked out their website and discovered they frozen and freeze-dried raw food and treats for cats and dogs. We emailed back and said thanks for the interest in our blog, but we don't eat raw here. She emailed back and asked if we would be interested in their treats. Well geez - we have never turned down treats before. And after talking to other bloggers, mom is interested in learning more about raw. So we emailed back and we got a box from them from the man in the brown shorts. There were treats and also a bag of freeze dried food.

The treats were a hit. Well, except for Junior - not sure what he thought about them, but he wouldn't eat them. 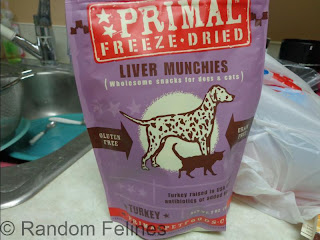 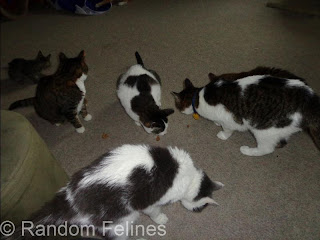 The treats come in BIG chunks - which can be a problem when you are being mugged by 7 adult cats and 2 foster kittens.....mom finally had to stand up to avoid certain mancats (*cough*Tommy*cough*).  Mom is thinking about banging something on the bag to break up the treats but doesn't want to turn them into dust either....gonna have to think about that one.

Miller and Stella LURVED these treats. Once the adults moved on, Miller found a big chunk. He picked it up and growled at ANYONE that walked near him while he ate it. Even mom!!  Goofy boy. 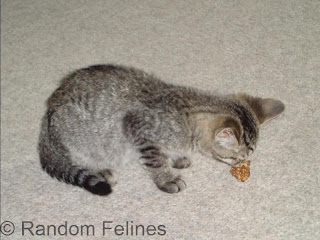 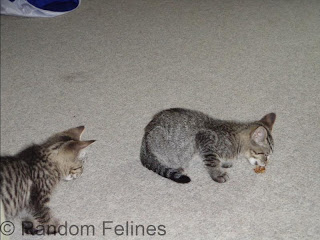 don't even think about it sister

So we give them 6 paws up and two very excited foster kittens.

And then there was the food. Mom wasn't too sure what she was going to do with that. And then the space kittens got sick. Mom decided to give the freeze dried food a try - eliminate everything else from their diet and go from there. We got the Chicken and Salmon variety. The kittens fell on the new food like they hadn't been fed in days!!  And we have to say, by Sunday morning (mom started with them on Friday night), they did seem to be doing a little better.

The bag is REALLY light, which would be great for shipping purposes (though you can buy it in stores as well). However, there is weird math on the bag to figure out how much to feed your cat. It is one of those word problems (two trains leave from opposite sides of the country, when do they meet in St Louis types - mom was never good with math anyhow....). And with 48 nuggets in a bag, mom still isn't sure how quickly she would go through a bag feeding us, but suspects it would be pretty quick. And, the freeze dried nuggets have to be reconsituted with water. It gives you how much water to add, but no instructions after that. Do you put in the water and let it sit? (that didn't seem to work very well) How long does it need to sit? With screaming kittens, mom finally gave up and smashed them up with a spoon to speed up the process. Which sorta works but mom learned to do it in the kitchen to avoid being climbed. 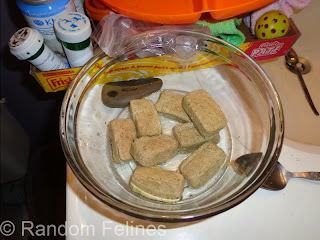 So, while mom thinks it is probably helping the kittens, she doesn't think we will be switching any time soon.

Final tally: loved the treats.....not so sure about the food. However, that being said, if you had been feeding raw before in this form, it might be easier for you. Our mom - not so much. To the Primal people - thanks for thinking of us.

*we got the food and treats at not cost in turn for our review. we didn't get any other compensation and all opinions are our own