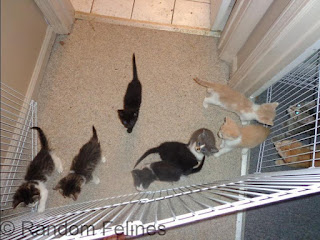 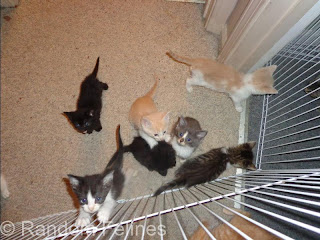 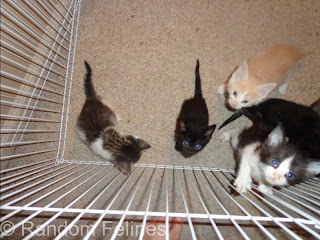 Rapunzel, the momma cat, went back to the shelter last week. She was SO skinny and wasn't nursing the kittens. Then Monday and Tuesday night she spent YOWLING at the bathroom door. Ugh.... So mom asked the cat advocate if Rapunzel could go back to the shelter to gain some weight.

And then they made a discovery.....Rapunzel has coccidia. Which means all the kittens have it too. It is an internal parasite so the kittens are on meds. And they are a HOT MESS!!!  The parasite and the meds gives them the runs and while they are being very good about getting to the box, they are still pretty messy. Add to that the fact that they are eating canned and are getting that all over themselves and each other......  let's just say we suspect mom is going to spend an evening this week in there with the kittens and the shower will get involved. :) Mom has an old pair of flip flops in a bag by the door she uses when she is in there too.

You may have noticed that baby jail has been moved to the bathroom door. Since the space kittens are having issues and can get over the baby gate (sigh....) mom moved baby jail back to act as a gate back there. She would prefer to leave the door closed but it makes the kittens nuts to be closed in.  So the gate is up and giving them some air and space.

~~~~~~~~~~
Responding to some comments:
1. We think that is Sputnik signing in the second picture (he is bigger than Gemini but it is hard to tell unless they are right next to each other).
2. Yes, everyone could catch it. However, the space kittens have been in quarantine since they got here (with the exception of baby jail which is a relatively new development anyhow). So, with them being on meds and the exposure being low, not much chance of it happening.
Posted by Random Felines at 7:00 AM