We are having a hard time being thankful today. Mom got an email on Tuesday from the director of the shelter (remember mom volunteers at 2 places - a limited admission "shelter" and the rescue). Daisy was having problems at the shelter. She spent some time here with us getting over a cold and had been at the shelter for quite a while. And at another shelter before that for about 4 months. 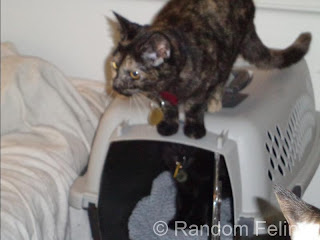 The email asked for mom's input as Daisy was being aggressive with other cats and was attacking people. Mom once again told them that after seeing Daisy here, she was sure it was more inappropriate behavior due to lack of socialization - and that the stress of being in a shelter wasn't helping.

This morning mom got the notice that was sent to the volunteer leaders at the shelter. Daisy was euthanized yesterday due to her unpredictable and unstable behavior. While we understand their position, we are heartbroken that the place that intially took her in did such a disservice to her (and heaven only knows how many other cats) by putting her in a cage at 6 weeks old. We know that this shelter didn't want to add to her stress anymore and that they felt letting her go was the best way. We aren't here to criticize that and we hope that if you feel otherwise you will not comment as mom is heartbroken enough.

We know that some people will ask "why didn't you take her?" Honestly, she needed a quiet home with a cat that would have taught her how to act. While we could teach her, there are too many tiny kittens here and honestly, she was unpredictable enough that mom won't risk the tinies. We don't have enough space to separate her - which wouldn't really be fair either. And then once she was here, then what? The chances of finding her a family would be pretty small. There is just no good answer to a problem like this.

We hope Daisy is finding some peace over the Bridge. And we are sorry that there wasn't more we could have done to help her......

(we know some of you read about this yesterday on facebook but mom is still pretty upset and just wanted to get it out)
Posted by Random Felines at 7:00 AM

Email ThisBlogThis!Share to TwitterShare to FacebookShare to Pinterest
Labels: daisy