Random Friday this week is interrupted for some other news and mom is having a minor ranting moment....

As you all know, we lost Gemini this past Sunday.

Mom noticed on the shelter website on Tuesday morning that Rapunzel, their momma, was off the website - which normally means the cat has been adopted. So mom emailed the cat advocate asking if Rapunzel was adopted and when they next wanted to see the kittens.

Mom got an email back: Rapunzel wasn't adopted. Everything was fine Monday morning but when the advocate when back to check on everyone in the early afternoon, Rapunzel was curled up on a chair and had passed away. Not a mark on her and nothing around that would give any indication what happened. The shelter is running some tests, but as of right now, we have no idea what happened. 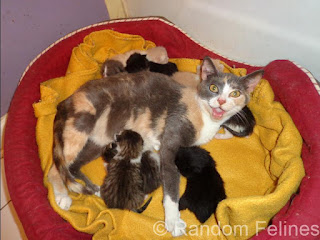 In the email, she said they wanted to see all the kittens back on Thursday when the vet was at the shelter to see what might be going on. Mom got a call from the shelter director Thursday afternoon. Aurora (one of the tabby girls) was pretty sick (the vet said pneumonia and a collapsed lung though heaven knows she was acting ok Thursday morning) and they euthanized her. Rocket (our black and white boy) and Sputnik (the black male) are being hospitalized overnight to get some supportive care. Rocket has been a hot mess and Sputnik was eating off and on and had the runs this morning.... The hope is to be able to get them back tomorrow. Please be thinking of all of them. 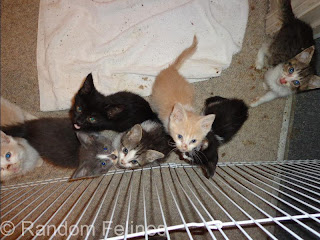 And mom - she has a case of the sads and the angries (see below).

~~~~~~~~~~
Mom here with a rant. I will admit up front, in an effort of full disclosure, that the shelter director is NOT my favorite person. She comes across a little false to me and I have had more than one run in with her where she "claims" someone has said things about me but can never back them up - but I am the one that gets the black mark.

In her conversation with me about the kittens (and at least she called me this time...as the story goes, she was supposed to contact me on Monday about Rapunzel and never did

But then she said the following: "you seem to have some bad luck and maybe we can sit down sometime and go over some procedures and cleaning steps so this doesn't keep happening."

She doesn't know about my fostering for the rescue....there is some animosity between the groups (don't get me started) and it just isn't worth the drama. But.....I don't have these problems with their kittens. Don't get me wrong, not every kitten that goes through here is a miracle healthy-no-issues kitten (though it does happen - the beer kittens were great). That is the nature of rescue - take in strays and ferals and everything else and you aren't going to get perfect litters of kittens.

But to make it sound like somehow I am doing something wrong.....oh hell no. I didn't say anything, but give me a break. No - the three messiest kittens didn't get a bath before going over this morning. Screw that though.....  I honestly think I am done fostering for this group - I don't know if forever, but certainly for now. Let her take it however she wants to - I really don't care. I know they are short foster families. I know they don't have many that will take momma cats with tiny kittens. And I know they don't have many that will take sick or snotty kittens. But to throw this back at me????  Unfair..... very unfair.

As for the logical questions: why would they give them back to me then? cause they are short handed and need the help. why would I take them back? because despite how I may feel about the people, I love those kittens and want to see them better and ready to head to their forever homes.
Posted by Random Felines at 7:00 AM