Mom wanted to have the snack food kittens given the once over by the vet - get some weights, opinion about Samoa's goopy eyes and Triscuit's weight. 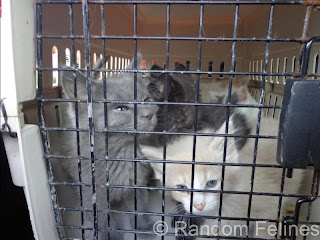 She loaded them up and off they went. Mom says she feels kind of lucky since they have traveled pretty often so they are pretty good in the car. Just some toes popping out through the bars and poking her.

They arrived at the vet's office and mom let them out to get used to the room. 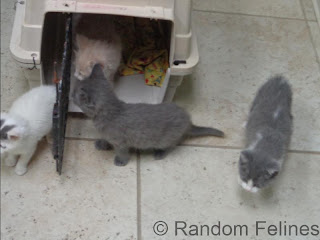 Everyone was pretty good. And then.....there was snuffling under the door!!!!  Everyone went on high alert until it went away...... 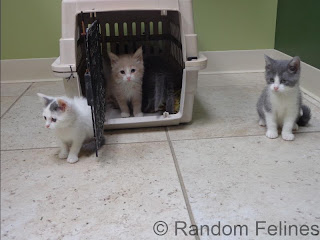 we are stayin' over here until that noise goes away

Everyone got checked out and got a thumbs up!!! Mom specifically asked about Samoa and Triscuit. Samoa has some goopy eyes - he is going back on antibiotics for a time until they are REALLY cleared up. Triscuit is tiny and cute and that is the official word from the vet. MOL

Mom has speculated that maybe Triscuit and Samoa are not actually related to the bigger four kittens. The suspicion is that the bigger four were in fact Cookie's kittens and she willingly took the other two when they all came here. The facial structure of the smaller two is a little different and they are just smaller than the others. Not that it matters, but it would certainly explain the size difference. 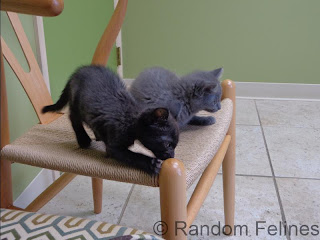 Samoa and Chex checking out the chair in the room

OK - so mom just notices that Samoa actually weighs MORE than Dorito. So much for the smaller theory....  MOL. But he certainly LOOKS smaller - must be cause Dorito and Chex are fuzzy.  :)  But, Samoa's structure is closer to Triscuit's size and structure.

Also - notice the size of Milano and Cheeto..... you know what that means!  Mom will be calling the spay/neuter clinic next week to make their appointments. By next weekend they should be ready to be adopted.

Oh - and Cheeto got revenge....he pooped in the carrier on the way home and mom had to drive with the windows down.  MOL
Posted by Random Felines at 7:00 AM