The zen of transportation....

We are letting the mom take this one today....

I love doing transports. The selfless reason is that I can be a part of getting an animal either to a foster or to a forever home...but definitely on the road to a better life. The selfish reason is this: I don't have to worry about anything. I pick up the animal and drive from point A to point B and then go home. There is a sense of relaxation to it - peaceful drive for the most part with nothing much to worry about.

And then there are days that seem to be arranged by the Three Stooges.  Saturday was one of those days....

It started Friday. Of all the kittens in foster care with the rescue, the ones from Wednesday that were fixed here are about the only ones ready to be adopted. The head of the rescue is getting tired of dealing with a cranky public that comes in wanting kittens and gets annoyed when there just aren't any. From a rescue standpoint, you know that a loss of adoption isn't a good thing, but you hope maybe, just maybe, this is a sign that spay/neuter is working (though we suspect it may just be the calm before the storm). So I was dealing with "when are the kittens going to be at Petco?"

Saturday morning - I have transport set up with the bloodhounds. YEAH!!! I love those dogs. I get to the hand off spot....and we can't get the dog out of the car. She is so fearful she is barking and growling and snapping. OK - that's new.  A few phone calls later - transport coordinator, head of the rescue and a local vet....it is decided that the first driver will just take her back to where she was being boarded.  Where apparently she jumped out of the car and was beside herself with excitement. oh well....maybe next time  :)

The off to deal with kittens (come back tomorrow for that tail).

Later that evening, a transport run for Cane Corso Rescue. I don't normally do 2 in one day, but don't mind. I met and picked up Mia. 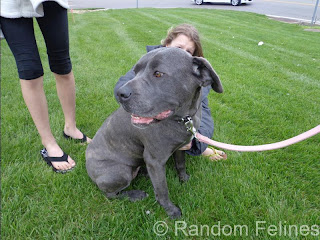 Her new mom and dad were driving from COLORADO to pick her up.

Somewhere along the line I managed to misread an email. I was sure I was meeting the adopters. Apparently there was another leg in the middle. So, the leg before me was running behind due to traffic. I get going and am trying to figure out where I am headed and if there is a better meeting place. I find one and text the adopter. She texts back "IN or OH". I am all... ummmm OH. She then calls me - to say she thinks I am meeting someone else but not them. Awesome - now the adopters think I am nuts. :)  I call the coordinator and we are laughing. While I am talking to her, the phone beeps with an incoming call that I ignore. Liz says she is going to call the woman I am meeting next to let her know about the time. I check my voicemail - it is that woman saying she is early and knows I am running late.....gotta love it.  :)  Melanie was great and Mia ended up with her new mom and dad Saturday night.  I laughed with Liz on the way home and said I was headed home to have a drink and go to bed.