Guess what happened on Sunday????

As a continuation of yesterday, mom ran the kittens up to Petco between transport runs. Chex, Cheeto and Milano were all spayed/neutered and ready to go. Mom had spoken with a woman interested in Milano and they are spoken again Saturday morning about meeting.

Mom took the playpen and the three kittens up to the store. They were a BIG hit. S came in with her husband and their 6 year old son. They had been interested in Milano. And then Chex turned on the charm.  And Cheeto was his adorable self.

After watching their son play, they had a conversation and decided:

To take home Chex and Milano together!!!!

Mom decided to bring them back home overnight and the family would get everything set up at home and pick up the kittens on Sunday.  Mom packed everything up and got out to the car - and discovered she had left the application in the store. She walked back in a man was looking at Cheeto and mom got Cheeto out and they talked for a while. He was very interested and filled out an application.

So, Sunday afternoon, EVERYONE went home. 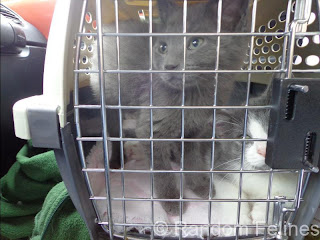 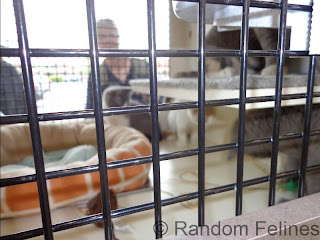 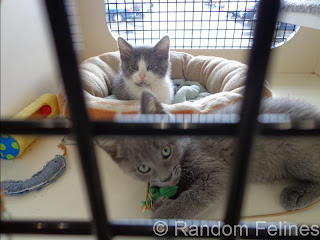 The boy said Milano will be renamed Eleanor, but they hadn't decided what they are naming Chex.

Cheeto will be an only kitty and gets to keep his name. But they are getting a roommate in August and she has a little dog. Cheeto met him on Saturday - Cheeto hissed and puffed up but they are slowly going to introduce them over the next few months. We are sure Cheeto will be fine.

Mom normally sends up a gift bag with toys and treats and picture. We will make suggestions about toys the kittens like. In Cheeto's case, mom STRONGLY suggested a trackball - which his new dad bought for him.

Concats on the new families kitts!!!! You are in great hands. We will miss you but send good wishes!!!

Within a couple of hours being home, we got this picture from Cheeto's new dad: 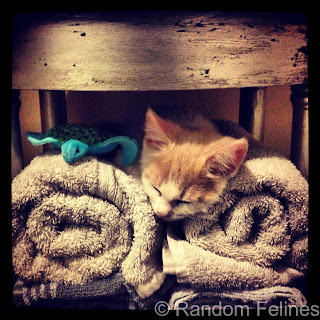