She missed Mo's Gotcha Day yesterday. Sheesh.....she would leave her head some place if it weren't screwed on. Mozart has been a part of the family for 6 years - he started as a foster and mom went to the shelter and adopted him after he had been back for a week. He is the official greeter and snuggler of the family. 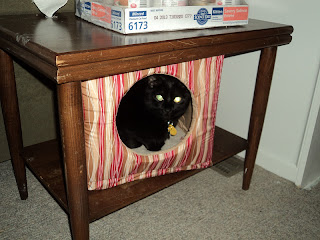 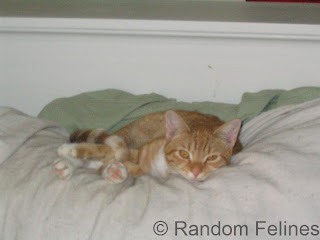 Well, we all know he gives mom the wide walk around. Don't get too close - don't make eye contact. Mom has hope that SOME day she is gonna get Junior to warm up to her. We aren't gonna hold our breaths.

Anyhow, over the weekend, he started running around and shaking his head like something was bothering him. The more we watch him, the more mom got a little concerned.

Mom finally got everyone in the back room under the pretense of serving dinner. She had a towel and chased Junior around the room to catch him. We don't suggest you try this at home - in this case, the audience participation was unappreciated (mom: Junior was running around and howling, Ivy was lit up and running around and Tim was howling.....sigh).

Anyhow, mom finally caught him and wrapped him in a towel. Now, the light isn't great in that room, but his ear looked kind of nasty. She tried to clean it a little and Junior managed to escape. More chasing and she got him again. She cleaned a little bit with the edge of the towel. Not sure what was up, but there was a little blood on the towel. He isn't running around and shaking his head any more so mom isn't worried enough to call Dr. T and get her over here now. However, the first shift of the year is up in March, so Junior will get his ears cleaned. He is on the only-freak-out-the-feral-cat-every-other-year vet plan anyhow, so he would have been up for an exam. We will just add the ears to the list.

But would it be too much to ask to have things be calm for a while??? Oh well....