It has been a slightly quieter weekend around here.  See, Friday night mom got a text from the rescue lady. Someone had stopped by the rescue center.....they were dropping off donations but wanted to ask about Bourbon after seeing him on Petfinder.

Now, mom will admit that her heart skipped a beat.  But, she did the right thing and called them. They had a previous special needs cat from the same rescue. That cat developed a neurological issue and ended up losing feeling in his back legs. He only lived about 18 months, but mom said you could tell they loved him very much. They spoke about Bourbon's issues and mom mentioned his brother Moonshine was living here too. They made an appointment to meet both boys on Sunday. 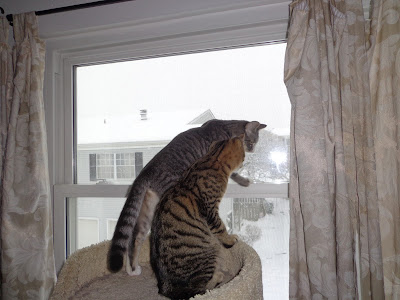 what the carp is all that white stuff??? 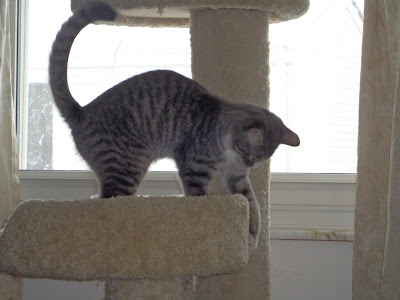 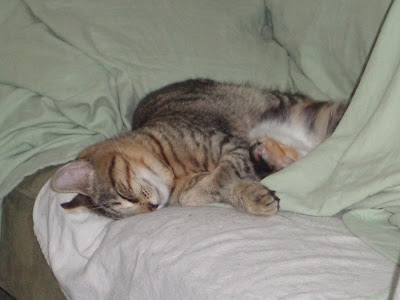 yes, that is Emma curled up with da Bourb

So Sunday morning mom packed up the boys and met this very nice couple. No kids, no other animals. Mom got there early enough to get Bourbon out and on his leash/harness and comfortable. The couple showed up and they started talking and mom handed over Bourbon. Logan (the dad) is pretty tall and has a beard. Bourbon did his lean back and give you the "look" thing - and then reached out to touch Logan's beard. Too funny.  Moonshine came out and was loved on by Laura for a few minutes. They talked about helping Moonshine adjust and his favorite trick of carrying around a ball in his mouth and throwing it down the stairs to chase it.

They fell in love with both boys and adopted them that morning. Mom said did say that they were adopting two kittens and a potential stalker - which they are ok with.

Mom is a little sad, but knows that this couple is well equipped to care for Bourbon, accepts both boys for who they are and are just what mom could hope for. They have moved furniture and built stairs for their previous cat and couldn't wait to get them home. Mom knew the only way Bourbon was leaving here was with the "perfect" family.  And they were open to adopting Moonshine too. :)

Good luck and much love to Bourbon, Moonshine and their new mom and dad......