Da Bourb is in TROUBLE!!!!  See, he loves mom. And he loves to sit on mom. But.... last weekend he was sitting on mom's lap while she was on the laptop. He reached up at one point and bonked her on the nose. She reached up a little bit later and her fingers were wet. She looked and there was blood on her fingers. She went to the mirror to check her nose.......and the Bourbon got his toenails cut. He got the edge of her nose AND he got her top lip too. 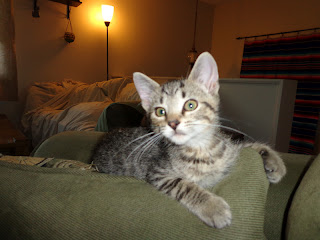 what? I didn't do nothin'

The Celestial Kitties made the comment yesterday that if you didn't know about his knees, you would presume he was scared and walking low. That is what the v-e-t thought when mom went to pick him up after his last check-up. Mom said nope - they let him out of the carrier, mom called him and he ran right too her. Mom said, not scared, just his normal walk. :)

Mom also says it is gonna be a few days before she allows any more Bourbon kisses. We hads a house fly inside yesterday. Mom whacked it but before she could pick it up to throw it away.....Bourb ate it. ewwww

~~~~~~~~~~~~~~~~~~~~~~~~~~
And of course, no sooner does mom say that Poncho is nutty, then he decides to take a nap in her arms the other night. It was an awwww moment. Of course, he didn't last too long before he was off again. He also was "attacked" by Junior at an unsuspecting moment.....and after making Poncho scream like a girl, Junior now takes the long route around him. :)  Poor Junior - he loves playing with the kittens but even he doesn't quite know what to make of Poncho. 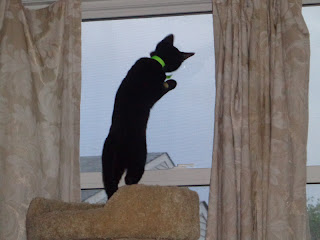 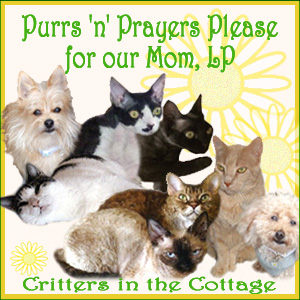 LP could use some purrs as she is having surgery on Monday.

~~~~~~~~~~~~~~~~~~~~~~~~~~~
We plan on having a lazy weekend (per normal). Grandma and Grandpa are having a garage sale (again - who would want to buy there garage??) so mom will be over there helping them on Saturday. And mom has an adoption event on Sunday at Petco. Guess HER weekend isn't gonna be so lazy. MOL
Posted by Random Felines at 8:15 AM