Why is mom thumpin' her head on the wall?
Hey mom  - would it have something to do with the new guys in the bathroom?
yep.....that would be it

Should we tell everyone what is going on before you injure more brain cells?
sure - that would be great

OK, so when mom was coming home from work last  Friday, she saw two juvenile orange kittens whappin' on a neighbor's door. Now, mom isn't friends with most of the neighbors, but she knows this guy has a dog but doesn't have cats. Mom's only thought? "crap"

Deciding to stick her head in the sand (and why would you want to do that anyhow? how do you breathe??), she came home, put out food for Allie (the momma to the alcohol kittens), fed us and then had some dinner. Out of curiousity, she stuck her head out the balcony door after finishing her dinner and saw this: (the big gray box is the a/c unit outside the front door) 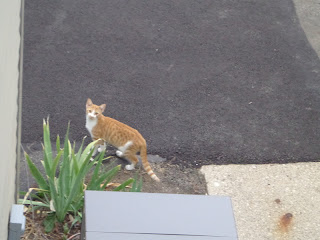 Mom headed downstairs to see if the kitty was friendly - it certainly appeared to be one of the ones she had seen banging on the neighbor's door. As she got outside, the lady who lives across from us stuck her head out and said she would be right down.

It seems the neighbor-chick was working in a bad neighborhood (security work) on Thursday and these two kittens came right up to her. And they were so skinny and scared and she felt bad so she brought them home with her. Only she can't keep them, so Friday morning she just let them loose.
ok - at this point it was ALL I could do not to strangle her.....

Who is tellin' this story mom???

Forward to Tuesday......mom got a call about 2 kittens needing to be in foster for about 10 days until surgery. Mom agreed and went in Tuesday night for her volunteer shift and to pick up the kittens. (PS - Eclipse is doing great and just waiting for an open cage on the adoption floor - and a kitty went home last night, so hopefully really soon)  As mom went to see who she was taking home.....she realized it was the kittens from Friday.

But now we have these guys in the bathroom. They are about 6 months old and cute, but freaked out right now. The shelter named them Luke and Duke. Mom has no idea which is which. The one with the white is friendlier than his brother. But they got a ways to go to get socialized.... 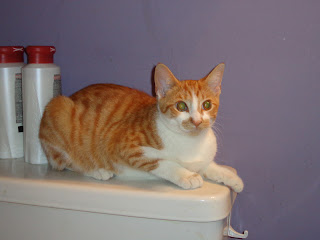 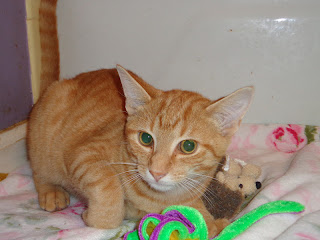 Mom took Bourbon in there last night to see what would happen. The orange guy hissed at Bourbon (who was more interested in their toys than in them). The orange/white guy was by the bathroom door and Bourbon hissed at him. ugh....  But Gin keeps sticking her toes under the door and they seem interested. Of course, the orange guy has hissed at mom coming in the room a couple of times too. Hopefully a little more time will calm them down.﻿
Posted by Random Felines at 8:30 AM