Oh - and the cool air machine seems to be working again too!!!  Grandpa turned it off yesterday afternoon and then turned it back on last night before he picked mom up from the airport. When she got home (really really late) the whole place had cooled down a lot. 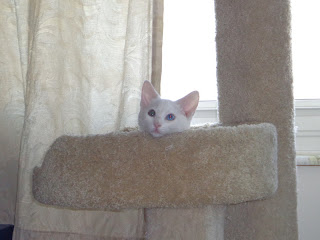 We were all pretty excited to see her. Of course someone moved the gate and she had to spend a few minutes catching the kittens so she could go to bed. :)  Mom said she was amazed how much bigger the alcohol kittens looked after being gone for just a week. No word on Bear yet - she was told that Miss Beckie picked him up and so she is waiting for Miss Beckie to call her back.

Mom's said she is going to tell her story of last week in a couple of installments, so stay tuned.


DeLynn and I left Ohio on Tuesday morning. We made it about 800 miles the first day. DeLynn drives a Honda Civic hybrid. It was the two of us, Jack the 120 pound black lab mix & two cats. Winnie (the younger cat) has traveled many times as she belongs to DeLynn's daughter Leah who goes to school in Montreal. It was Cinnamon we weren't sure about. He is 9 years old, not found of being caught and not fond of the carrier. He spent the first day making some noise, but we expected screaming and he did more of the low level meows. He stopped about 2 hours before we stopped for the night in Kansas (near Fort Riley - I waved to the Army of Four sibes when we passed). Everyone was good at the hotel. Second day we made it to Junction City CO and Cinnamon talked for the first couple of hours and then settled in. We crossed Utah on Thursday and made it to Kanab about 2pm. We crossed 6 states and 2 time zones in 3 days.

More about Best Friends tomorrow. :)
Posted by Random Felines at 10:51 AM