Mom looked at the picture from yesterday and realized you could see Edison's auction tag. Not sure why the temp foster didn't remove it, but mom did tell the transport coordinator (who was also driving a leg) that it was still on and Chris promised to bring scissors to cut it off. Yes - cut it off - there is no buckle or anything - they are put on and grommeted shut. Just sad.....  But better knowing he and Marie will NEVER wear one again.....  paws crossed for permanent homes soon for the slobbery kids.
~~~~~~~~~~~~~~~~~~~~~~~~~~

OK - so we teased you yesterday about mom giving two kittens a bath. Mom just takes them in the shower with her. They get more wet and they are shut in behind the shower doors. No one enjoys it, but it seems to be easier than arm wrestling them in the sink - in the shower mom can keep them on the bathtub floor and avoid the pointy parts.

But we would like to tell you WHO got a bath. Cognac has had some....ummmm....issues with the backend. So, he needed to be cleaned up.

The other guy???  Well, when mom stopped at the rescue adoption center the other day, there was a single kitten in a carrier. Seems someone in the shopping center had seen a cat out back and wanted to borrow a trap. The rescue lady went out and it was a little black kitten. She put down food and just grabbed him - no trap needed. 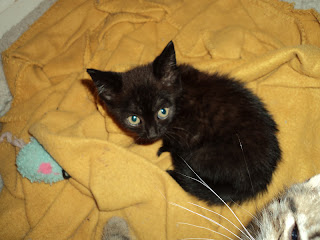 Mom had seen him a few times and finally on Saturday when she was picking up the cats to take to Petco, mom threatened to put him in her pocket. The rescue lady rolled her eyes and said "just take him already". So mom brought him home.

He was the other guy who got a bath. He had a bad case of fleas and got a pill on Friday to kill them all, but mom wanted to be sure he was cleaned up. He was good and then cuddled with mom. And she spent about 15 minuted picking little tiny ticks off of him (and drowning them in rubbing alcohol - best way to kill them). She is pretty sure she got all of them. While she turned him all over while he was drying - and bless him he made biscuits on her arm and PURRED.

The alcohol kittens have pretty much accepted him. He is pretty scared so he spent time with mom while the other group ran around loose several times over the weekend. Doc on the other hand hissed at the poor guy several times. 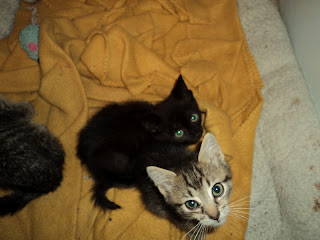 So, we hope you will help us welcome Bear. (oh and he isn't completely black - he is more a chocolate color with red undercoat - mom is working on a better picture).

Posted by Random Felines at 9:52 AM