we are going to hand this over to mom:

I can only hope that this morning leads to a few good karma points for me.

I had signed up to do a transport of Edison for Ontario Bloodhound Rescue. In order to get to the boarding place to pick him up, I had to be out of the house by 7:20am (and to have time to grab some breakfast for the road). 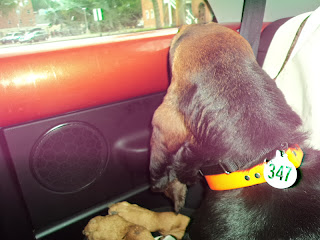 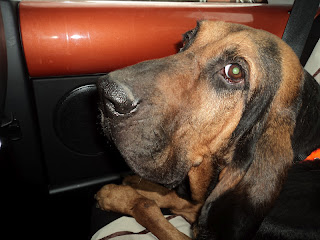 I got him in the car and he was wonderful. I did discover that the local vet listed him at about 2 years old as opposed to about 7 years old, which is what they announced at the auction. hmmmmm  Anyhow, Edison traveled so well and was a joy. I know his foster family and eventually his forever family is going to love him to pieces.

I got to the handoff spot and got him out to take him for a walk when this little jack russell mix dog came out of the bushes. Pretty dirty, no collar, and not neutered. great.....

The woman driving the next leg got there and held Edison - the little dog was scared of us but pretty interested in the bloodhound. I managed to FINALLY get a leash noosed over his neck and get him in my car. I don't know that area great, but I had passed the humane society. Back in the opposite direction. ok.....

I got there and spoke to someone explaining the situation. He sighed and made a couple of phone calls. He then told me that his director said they can't take the dog and I have to take it to the dog warden. Which is of course, another 15 minutes going away from home.

The dog warden was MUCH nicer. I have to admit, I now completely understand why people get so frustrated when they find animals. I am trying to do the right thing and somehow the burden is on me. Which is fine, I was never going to leave the dog in a parking lot off a 4 lane highway, but the average person may not do that. Anyhow, the dog warden scanned the dog - no chip. He took my information and how I found him. Said there is a 3 day hold and then he will be evaluated for adoption. 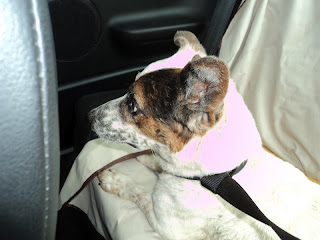 I got home and stopped to buy cat litter and discovered the cats hadn't been brought over. Made a phone call and ended up driving over to pick them up and bring them back. Oh and an interloper, but more on that Monday.

Then, home, a shower with a pair of kittens that needed a bath, and some Olympic watching.