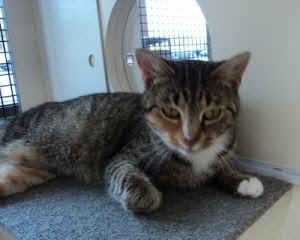 Mittens - still looking for a home
We are going to let mom take this one....
I have been volunteering (and yes even worked part time for a bit) in shelters for quite a while. I see all kinds of people come in and want to adopt. Some are great families, some need some education, and some should not have animals at all. All groups have a process to adopt and questions to answer.

However, I have noticed over time that some rescues seem to make it WAY more difficult than it should be. Isn't the point to get these animals adopted out so you can rescue more? I understand selective, but I have met families that I would have let take one of MY animals that have been turned down by another rescue.

That being the case, I am now doing most of the adoptions out of the one store for the rescue. I see all kinds of things - and will try to educate first. So far I only had one person I would have turned down, but they "changed their mind" after I tried to get more information out of them. :)
I did get an application the other day on Mittens. Great family - one older cat in the home, own their own home, two kids, two adults, all the right answers. Except the kids are 1 and 3. Yeah - that may be a problem cause Mittens can be fiesty. I have heard of groups that WILL NOT adopt to families with young kids. Really??? But, I don't want the family getting frustrated with her and returning her and her having to deal with that drama either. So I called the mom. Told her my concerns. And rather than saying no, I suggested another cat in another store (that was fostered by my friend Beckie). They said they would go meet Expo.

So, what is the point of this??? Maybe rather than volunteers saying no, make better suggestions. And people need to be aware that we aren't saying no for the heck of it....we all have reasons. But I also think rescues need to not adopt for the sake of adopting - stick to your standards and make people understand why.

And to those rescues out there that make people jump through so many hoops - your adoption numbers may be down because of it. And consider this - the last woman that I spoke to who had this problem ended up going to a backyard breeder. So now you are helping to perpetuate the very problem you claim to be trying to solve......

As a side note: Expo went home Saturday with her new family and her new mom couldn't be more excited.
Posted by Random Felines at 8:00 AM