Wendy and the fast food kitts 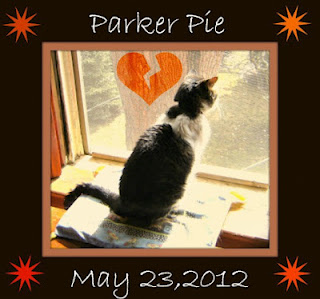 Mom and kittens were at the shelter on Monday for vaccinations, dewormer and more marquis paste (for the coccidia). Mom left them with the cat caregiver and snickered....have fun with that momma cat - she don't like to be medicated. MOL

Everyone is doing pretty well. There was a note about the tiny boy - BK. He is about half the size of his siblings. But active and eating - more or less. They want him supplemented with a combination of a/d (high protein/high calorie) and KMR. Mom had been syringe feeding him some KMR anyhow. About the only way to do this is feed everyone and then give him his own plate in the bathtub. Monday night and Tuesday morning he ate the a/d. Tuesday night - not so much. But he was all about what everyone else was eating when he was "released". Wednesday morning - slurped up the KMR and ignored the rest. Boys..... As of last night and this morning, he has eaten about half his body weight....in fancy feast. Mom says she gives up - so long as he is eating, we say let him have what he wants. He weighed about .75 pounds last night while one of his brothers weighed 1.25 pounds. 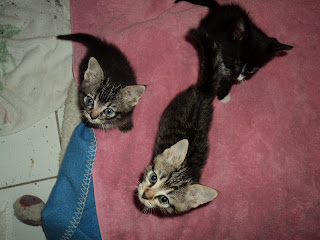 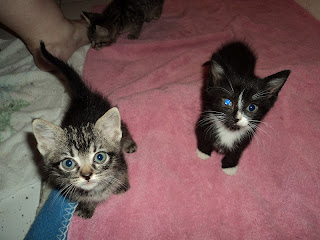 Wendy is still pretty skinny. The shelter suggested giving her a break - only she hisses at everyone she sees. However, she is good about getting away from the kittens. She will lay down on her belleh or get up on the counter. Mom laughs when she walks in to find Wendy on the counter and 4 little boys lined up on the floor staring up at her...... 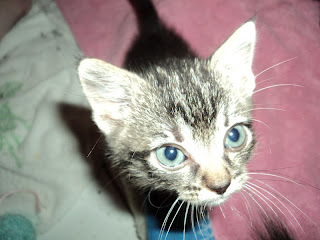 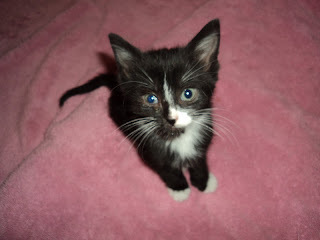 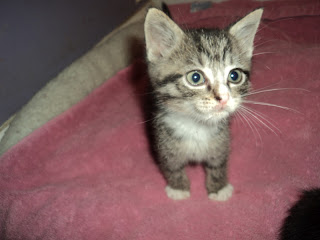 The bathroom is once again a wreck - mom's project for the weekend.
Posted by Random Felines at 8:42 AM

Email ThisBlogThis!Share to TwitterShare to FacebookShare to Pinterest
Labels: wendy and kittens